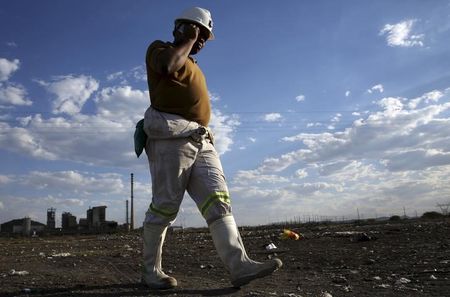 Battered by strikes, rising costs and weak platinum prices, South Africa-focused Lonmin said last month it also planned to raise another $370 million in loans to refinance debt currently due in May 2016.

The final results of the votes will be announced later on Thursday, Chairman Brian Beamish said after the shareholder meeting in London.

The loss-making platinum producer had asked its shareholders to vote on five proposals, including consolidation of Lonmin shares. Shareholders also provisionally authorised its directors to allot new shares.

Lonmin shares have plunged more than 90 percent this year and the company has written down $1.8 billion off the value of its assets.

The scale of Lonmin’s plight was illustrated on Nov. 9 when it priced its rights issue at just 1 pence a share – a huge discount to the stock’s previous session closing price of 16.25 pence on the London Stock Exchange.

That meant investors would have to buy 46 new shares for every one they already hold, just to retain their current stake in percentage terms.

Analysts said the low price was a strategy to force shareholders to take up their entitlement or risk having their investment in the company heavily diluted.

Lonmin had warned that if it doesn’t raise the cash it needs, its shares could be suspended.

“We had no choice but to vote in favour because we will be wiped out if this doesn’t go through. But does that mean we will be with the company in the next 10 or even two years? We don’t know,” Anthony Guildford, a Lonmin investor since 1969, said.

Some investors, including pensioners, raised concerns about the consolidation of shares.

“There had to be a better idea than consolidation. I will never see my money (14,500 pounds in shares) back at 6 pounds where I bought … They were 1.70 last Christmas!,” one investor said.

The company has said its share sale has been fully underwritten.

South Africa’s Public Investment Corporation (PIC), which owns about 7 percent of the company, has committed to buying its full entitlement and has sub-underwritten a material portion of the issue, over and above its entitlement, Lonmin said.

Lonmin still has to convince the wider market it can be a viable business with platinum prices near seven-year lows below $850 an ounce, hobbled by slowing demand in top consumer China and as the Volkswagen’s emissions-cheating scandal weighs on platinum market sentiment.

The metal used in emissions-capping diesel auto catalysts and jewellery is on track for a 30 percent decline this year, its third consecutive annual fall.

This would be Lonmin’s third rights issue in six years after it asked for cash from shareholders in 2009 and 2012 to shore up its balance sheet.

Lonmin was hit hard last year by a five-month strike in South Africa’s platinum belt – the country’s longest and costliest – because, unlike peers such as Impala Platinum and Anglo American Platinum, almost all its operations were in the strike-affected area.