Lonmin will not shy away from merger or takeover 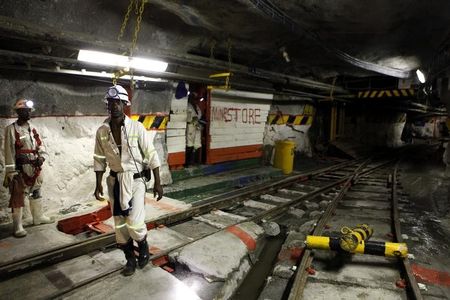 CAPE TOWN (Reuters) – Platinum producer Lonmin will not “shy away” from any merger or takeover but for now the company is focused on its plan to survive tough market conditions, its chief executive said on Tuesday.

Like its peers, Lonmin is battling sharp falls in commodities prices amid a supply glut and slowing demand growth in top consumer China. Its share price has tumbled by more than 95 percent since the start of 2015.

This has led to market speculation about a possible takeover of the 107-year old company and some analysts have said efforts so far to turn the company around were not enough despite cost cuts and a deeply discounted rights issue in December.

However, no concrete news has emerged.

He declined to say if Lonmin was in any talks with any potential parties.

The price of platinum has fallen about 30 percent year-on-year, forcing miners to sell assets and cut production and jobs. Around two-thirds of the industry, whose mines were damaged by the five-month strike in 2014, are making losses.

Magara said the company was for now focused on turning cash positive in a low price environment – which involves closing high-cost shafts and cutting jobs.

“That’s what I am worrying about. The investors have given us money and we must deliver. Investors are asking if we are going to deliver on this,” Magara said.

Hurt by a prolonged 2014 strike, rising costs and the plunging platinum price, Lonmin raised $400 million through a cash call in December.

The rights issue was undersubscribed even though it was deeply discounted, forcing the company’s underwriters to buy shares in the company and showed that investors were losing faith in the beleaguered mining sector.

The shares were priced at just a penny each on Nov. 9, a 94 percent discount to the stock’s previous session closing price of 16.25 pence on the London Stock Exchange

“I have no doubt that there will be pressure on us when we finally start making money. Will we go and put it in a project first or will we pay investors?” Magara said.

“I think it’s important that investors will get their money back first. They deserve it.”

Lonmin has said it will continue to review its services and reduce costs, mainly through job reduction, as the slide in the price of its main commodity bites further.

“We have seen cycles come and go and I suppose this shall pass but I have to admit, it’s one of the worst I have seen,” Magara said.

(By Olivia Kumwenda-Mtambo, Editing by James Macharia and David Evans)

Africa, Business, Latest Updates from Reuters Lonmin will not shy away from merger or takeover