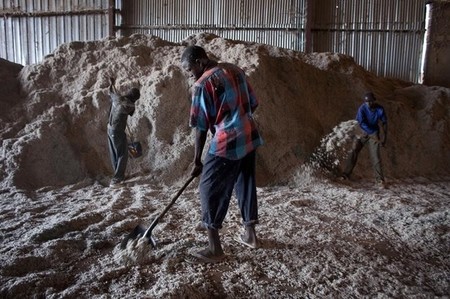 BAMAKO (Reuters) – Mali forecasts cotton production for the upcoming 2017/18 season at 725,000 tonnes, up about 12 percent from the current season’s record yield of at least 645,000 tonnes, the agriculture minister said on Friday.

The 2016/17 season ending in March will see the highest yield in more than a decade for the West African country, aided by increased prices and fertiliser subsidies fixed in 2015.

The new target will be achieved by planting more land, renewing subsidies and continuing a two-year-old programme that provides tractors at reduced prices, according to a statement from the agriculture ministry.

“In terms of cotton production, we have just crossed the threshold of 645,000 tonnes for a forecast of 650,000. This is a production record. We want to go … to 725,000 tonnes for the next campaign,” minister Kassoum Denon said on state radio.

Mali is West Africa’s biggest cotton producer and its season runs from April to March in two phases, production between May/June and September/October, with commercialisation from October/November to March 31.