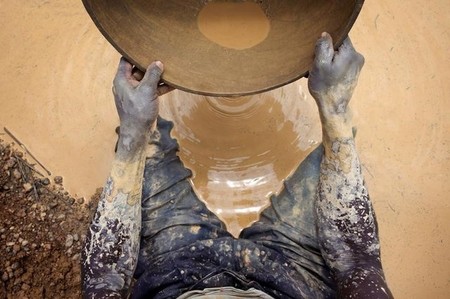 BAMAKO (Reuters) – The amount of gold dug up by people working informally in Mali could soon rival official production thanks to demand from domestic refineries, officials in the West African nation say.

The informal sector’s sudden growth, defying opposition from major commercial operators, is a major boost to an economy suffering from years of political instability. Mali’s government derives about a quarter of its revenues from gold.

It is Africa’s third-largest gold miner behind South Africa and Ghana, and artisanal mines contributed a third of the 70.2 tonnes of gold it exported in 2015.

Informal sector growth accelerated in 2012, when Islamists hijacked a separatist Tuareg rebellion in the desert north, throwing the country into chaos.

As the economy flagged under sanctions from its neighbours, farmers and others began digging for gold.

The Chamber of Mines now estimates that more than a million artisanal miners work at about 350 sites, producing between 10 and 15 tonnes of gold a year.

Government export statistics put output from artisanal mines at 23.7 tonnes in 2015. Since not all gold is declared, the real production figure could be higher.

“We think that if we organise it, (artisanal mining) could produce as much gold as the big industrial companies,” said the president of the Chamber of Mines, Abdoulaye Pona.

Mali’s largest gold refinery, Kankou Moussa, owned by Swiss Bullion Co., can produce 100 kg per day and sources most of its gold from an artisanal mining site in the southwest.

“Our principal target is artisanal miners, notably those organised in cooperatives, as well as small and medium-sized mines,” said director of operations Carlos Novo. By his calculations, artisanal miners in Mali might currently produce 36 tonnes of gold a year.

But Mali’s artisanal boom faces opposition from industrial operators. Mark Bristow, the CEO of Randgold Resources, which owns three major mines in Mali, has warned that the activity could drive companies to leave.

“They (artisanal miners) illegally occupy sites within companies’ permits…they use mechanised means, there are even small industries that produce gold without declaring anything,” Bristow told a news conference in the capital Bamako earlier this year.

The largely unregulated sector is plagued by fatal accidents, smuggling, child labour and environmental damage. The government announced plans in 2014 to supervise operations and give miners easier access to financing, but progress has been slow.