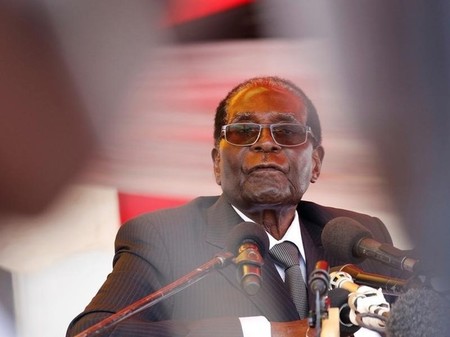 HARARE (Reuters) – Zimbabwean President Robert Mugabe has side-stepped parliament to issue a decree clearing the way for the introduction of “bond notes” that have raised fears of a return to a domestic currency abandoned in 2009 as hyperinflation crippled the economy.

The bond notes are meant to ease biting cash shortages that have gripped the southern African nation since March but have helped fuel anti-government protests in recent months.

Mugabe late on Monday used his presidential powers to amend the Reserve Bank of Zimbabwe (RBZ) Act, designating bond notes as legal tender that will be equivalent to the U.S. dollar, according to an official government notice.

Mugabe said bond notes, which he has previously called surrogate currency, “shall be legal tender in all transactions in Zimbabwe” just like the U.S. dollar, British sterling pound and South African rand, which are also used in the country.

Zimbabwe was this year hit by a devastating drought that left 4 million people in need of food aid. It is facing its worst financial crisis since switching its currency for the U.S. dollar as weak mineral commodity prices hurt its major exports, while formal unemployment remains above 80 percent.

Mugabe’s decree did not say when bond notes will be introduced. The regulations will last six months, after which parliament has to ratify or reject them.

But former finance minister and opposition leader Tendai Biti said Mugabe’s decree was illegal and could be challenged in court. He criticised Mugabe for resorting to a decree when parliament, dominated by the ruling ZANU-PF party, could have easily passed the law.

The RBZ first announced plans for bond notes in May.

“Even if assuming they (regulations) were legal, the presidential powers should only be used in extreme circumstances where there is no sufficient time to go to parliament in the interest of public safety and public good,” Biti said.

RBZ Governor John Mangudya has struggled to allay concerns of a return to the rampant money printing and inflation rates that peaked at 500 billion percent, by saying bond notes were an incentive for exporters and would not be forced on people.

Mangudya, who has previously said the new bank notes would start circulating early this month, did not answer calls to his mobile phone.

The RBZ on Tuesday started running advertisements in local newspapers and radio saying up to 5 percent incentive would be paid on all exports and diaspora remittances in bond notes.