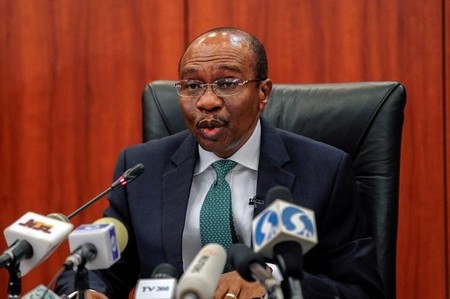 Entrepreneurs have criticized a halt to hard currency allocations by the central bank for the import of almost 700 goods to prop up the naira hammered by a fall in oil revenues and boost local food production.

“This policy was basically borne out of necessity to conserve foreign exchange,” Emefiele said in a speech, referring to the import ban, according to Vanguard newspaper.

“This policy needs to be supported not just in response to the pressure on the naira but as an opportunity to change the economy’s structure, resuscitate local manufacturing and expand job creation for our citizens,” he added.

Emefiele also said Egypt’s experience with a free float of its currency did not convince him Nigeria should follow suit as it might increase inflation.

“I have heard commentators suggest we should follow Egypt’s example and free the naira,” Emefiele said, according to THISDAY newspaper.

“What they do not tell you is that following their currency adjustments inflation today in Egypt is over 30 percent. Is that what we want in Nigeria?” he said.

The central bank has faced criticism from investors for keeping the naira at a rate some 30 percent above the black market where entrepreneurs are forced to go amid dollar scarcity on official channels.

The central bank was not immediately available for comment.