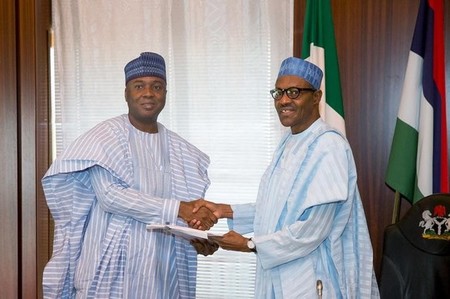 ABUJA (Reuters) – Nigeria must consider selling stakes in joint ventures with oil majors and other assets as talks to borrow abroad have not succeeded yet and would in any case not generate enough funds to stimulate economic recovery, the leader of the Senate said.

Senate President Bukola Saraki, the third most powerful official in Africa’s biggest economy, also said the oil producer might struggle with recession for up to nine months or even longer unless it got serious about attracting investors.

The government said this month it had approved loans from China, the World Bank, Japan and the African Development Bank, but Saraki, whose relations with the president have cooled since last year, said such talks were still ongoing with no deals yet.

“There is a big hole now in the fiscal deficit because that funding is not coming through. So we’ve got to look for alternative ways to fund that,” Saraki said in a joint interview with the Financial Times on Monday when asked about the loans.

The government has said it plans to borrow as much as $10 billion, with half of that coming from foreign sources, including a planned $1 billion Eurobond issue, to fund a budget deficit of 2.2 trillion naira ($7.21 billion) and boost an economy hammered by low oil prices and hard currency shortages.

Saraki said that even if the loan talks succeeded, the amount raised would not be enough to plug the hole in public finances. “My take is that even if it does come through, it’s money too little, too late,” he said, referring to the loan talks.

He said Nigeria needed to sell stakes in oil and gas joint ventures, oil exploration contracts and refineries to raise funds. “In my view, I really can’t see any other pathway to recovery. We need investors, we need to raise capital.”

Such an asset sale would be necessary even if global crude prices recovered to $70 a barrel and Nigeria managed to restore oil production to 2 million barrels per day (bpd) with an end to militant attacks in the Niger Delta oil hub, Saraki said. Officials say the attacks have reduced output by 700,000 bpd.

Saraki said Nigeria could overcome recession in six to nine months if swift action was taken — a more downcast view than that of the government, which has forecast a quick recovery.

Central bank governor Godwin Emefiele was due to hold a news conference at around 1315 GMT after a meeting of the rate-setting Monetary Policy Committee. The finance minister said on Monday the central bank should lower interest rates so that the government can borrow domestically to boost the economy.

Economists polled by Reuters last week predicted that the central bank would keep its key interest rate at 14 percent and reiterate its focus on resuscitating growth.

The government has said it is considering asset sales, but has given no details.

“If we do things right, the confidence will come in,” Saraki said. “If we carry on waiting for government revenues to go up, if we don’t do anything seen as thinking out of the box” the recession could drag on longer.

Nigeria’s 2016 budget was the largest in the nation’s history, but the oil price drop and Delta attacks have left the government scrambling for funds.

Saraki is from the same ruling All Progressives Congress (APC) as President Muhammadu Buhari, who was elected in March 2015 on a promise to end graft and mismanagement in the West African nation.

But relations between the two have been strained since Saraki ran unopposed for the position of Senate president last year, mainly with the backing of the opposition. He was not the APC’s preferred candidate.