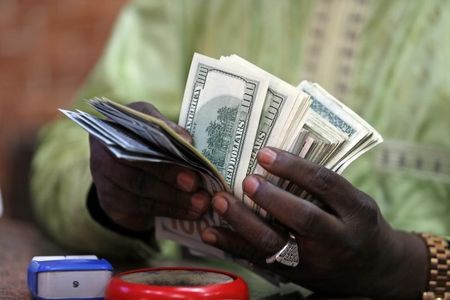 Nearly half of 2,818 bureaux de change operators were denied access to the central bank’s dollar sale last week because of incomplete documentation, weakening the naira.

On the official market, the naira traded at 198.90 to the dollar at 1141 GMT, around a rate it has been pegged to since February.

Traders expect dollar allocation to bureaux de change agents to increase on Wednesday as companies update their records with the central bank. That should helping the naira.

The central bank has asked all bureaux de change operators to submit accounts showing their dollar usage at the start of each week before they can gain access to future sales, a move traders said was aimed at curbing speculation.

The unofficial market accounts for less than 5 percent of total dollar trades in Nigeria. The bank sells around $30,000 to each operator every week.