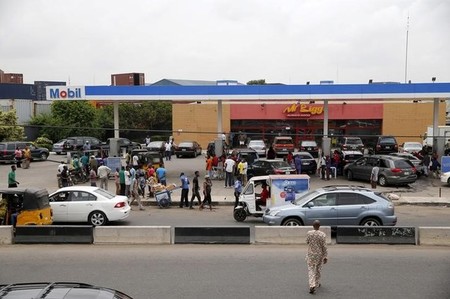 Oil Minister Emmanuel Ibe Kachikwu, the head of state oil firm NNPC Maikanti Baru and the entire government have stepped up efforts to keep fuel flowing into Nigeria without repeating the price increase of May and risking civil unrest.

Shortly before the meeting former Nigerian National Petroleum Corporation (NNPC) bosses had said such an increase may be needed.

A steep devaluation of the naira currency has made sales of petrol at government capped prices unprofitable, marketers say. Months of unrest in the Delta region has also cut Nigeria’s oil output and left as little as half the crude available that it needs to swap for refined motor fuel from trading companies.

“Gasoline is the top priority” for NNPC, said one oil industry source who, like many in Abuja was meeting daily with officials in the oil company. The company, and government, the source said, “will do whatever they can” to stop shortages and keep prices stable.

In a statement last week, NNPC’s Petroleum Products Pricing Regulatory Agency, which oversees downstream regulations, said there was “no basis” for price increase fears, and assured the nation of “uninterrupted supply and distribution.”

TAKING TO THE STREETS

Nigeria has four oil refineries, but none of them have been able to run consistently enough to provide Africa’s most populous nation with enough gasoline and diesel – despite its historic position as Africa’s largest oil producer, pumping around two million barrels per day.

That is, before unrest cut output by around a third earlier this year.

Available, affordable gasoline is crucial to the government’s credibility. Shortages bring the nation to a halt, leading to days-long queues for fuel and power cuts at small businesses that rely on generators to withstand frequent power outages.

Nigerian unions have already threatened to take to the streets if prices rise further, as consumers face inflation that is at an 11-year high of 17 percent.

The Independent Petroleum Marketers Association of Nigeria, which represents small and medium fuel sellers, is, however, calling for higher prices. It argues that the current state cap of 145 naira per litre is far too low, given the devaluation.

The currency fell to 420 per dollar on the parallel market last month, compared with the rate of 285 that the government was using when it set the cap.

Gasoline is imported into Nigeria by NNPC and independent importers, with each usually providing half the total needed, but the government said it has been providing some 90 percent in recent months.

NNPC, beset by dollar and oil shortages, is running a tender to buy gasoline over the next six months, as sources say it is concerned the current system of swapping crude and relying on other importers might not provide enough.

Militant attacks have hit pipelines and cut output by more than 700,000 barrels per day. As a result, NNPC has only around four crude oil cargoes per month this autumn to swap for gasoline, according to sources, compared with at least 10 cargoes during the spring months.

In its tender, NNPC asked for 90 days to repay in either cash or crude, which is as much as three times longer than the standard repayment window.

But the longer repayment, oil industry sources said, will both alarm some suppliers and could force NNPC to pay more.

“Companies will supply it – but they will submit terms where they think they can make money,” another oil company source said, adding it would be difficult for NNPC to get competitive prices.

But NNPC made sure gasoline importers were able to access dollars. Oil majors including Chevron, Exxon and Shell have to buy naira for local operations, a key channel through which dollars arrive. NNPC has funnelled around $500 million of this to gasoline importers over the past several months, sources said.

“If fuel marketers are unable to recover cost, they will simply stop importing,” regardless of whether they have dollars, said Alan Cameron, economist and director of Exotix.

Some are sceptical of NNPC’s ability to fill the gap, and warned that a failure could have serious consequences.

“The government is unlikely to remove the price cap introduced in May, meaning that the fuel shortages will continue throughout Q3, further hurting the already faltering economy,” said Malte Liewerscheidt senior analyst for Africa with UK-based risk advisory group Maplecroft.

(Additional reporting by Felix Onuah in Abuja and Ron Bousso in London. Editing by William Hardy)