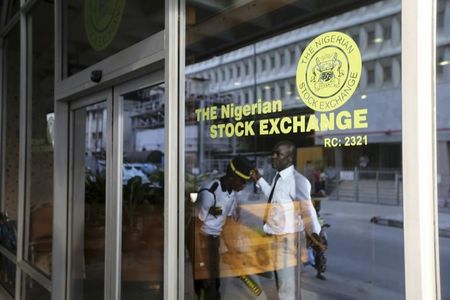 The share index, which has the second-biggest weighting after Kuwait on the MSCI frontier market index, has fallen for five straight days, sliding below the psychologically important 25,000 point line not seen since September 2012.

At the market close, the index was down 3.4 percent at 24,239 points. The index has dropped 12.4 percent in the first nine days of trading this year.

Currency and stock markets in Africa’s biggest economy have been hit hard by the fall in the price of crude oil, Nigeria’s main export, which has slashed government revenues and triggered an exit of foreign investors.

“From what foreign investors are telling us, when they have confidence in the naira/dollar exchange rate they can then make investment decisions,” Oscar Onyema, CEO of the Nigerian Stock Exchange told Reuters.

The naira has dived 34 percent on the black market compared with its official level of 197 after the central bank stopped dollar sales to retail currency outlets. The move has intensified speculation that Africa’s top oil producer will have to formally devalue its currency soon.

Onyema said the bourse expected 2016 to be challenging for the market after the index shed 17.4 percent last year with losses continuing into this year, as oil prices plunged and the domestic economy faltered.

Foreign buyers, who accounted for 54 percent of trading volumes, were on the sidelines owing to the lack of clarity on Nigeria’s forex policy, highlighting naira weakness as a deterrent to a market rally in 2016, he said.

“With crude oil prices down, accretion to FX reserves is out of the question … putting investors on red alert. The central bank may not be able to meet all the demand for FX even if it were to devalue,” said Ayodeji Ebo, head of research at Afrinvest.