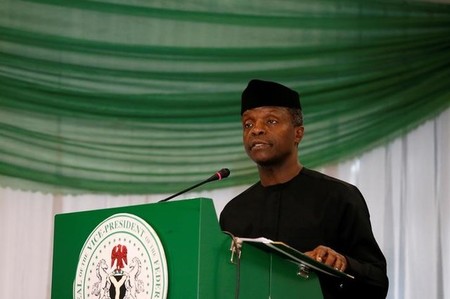 ABUJA (Reuters) – Nigeria hopes to conclude the sale of a $1 billion Eurobond by the end of the first quarter of 2017 and will seek to make its foreign exchange market more flexible, vice president Yemi Osinbajo said on Tuesday.

Nigeria is in its deepest recession in 25 years and needs to find money to make up for shortfall in its budget. Its revenues from oil have plunged due to low international prices and militant attacks in its crude-producing heartland, the Niger Delta, that have cut its output.

The government began the process of appointing banks for the sale of the Eurobond in September and had said it wanted to issue the bond by the end of the year. It has yet to announce a lender to lead the sale, however.

“At the very latest, between the end of the year and the first quarter of next year we will begin to see all that process concluded,” Osinbajo told Reuters in an interview.

The vice president said the severe loss of petro-dollars had caused “serious” foreign exchange shortages and had been worsened by attacks on its oil pipelines and export terminals.

The government had wanted to issue the Eurobond to help plug a gap in its record 6.06 trillion naira ($19.9 billion) budget this year, in addition to tapping concessionary loans from the World Bank and China as its oil revenues fell.

So far only the African Development Bank has come to its aid, approving a $600 million loan, the first tranche of a total $1 billion package.

Osinbajo also said his office was working with the central bank to make the foreign exchange market more flexible and more reflective of actual demand and supply.

Nigeria’s crude production, which was 2.1 million bpd at the start of 2016, fell by around a third in the summer following a series of attacks by Delta militants who want a greater share of the country’s energy wealth to go to the impoverished southern oil-producing region.

“At one point we were losing almost 1 million barrels per day (bpd) which translated to 60 percent of oil revenues … and that affects the availability of dollars,” Osinbajo said.

The militants, after saying in August they would halt hostilities to pursue talks with the government, said this month they had resumed attacks because of the continued presence of the army in the region.

Osinbajo said that the government was prepared to talk with the militants but that maintaining security was essential for law enforcement.

Ratings agency Moody’s forecast that Nigeria’s economy could expand by 2.5 percent next year if it could produce 2.2 million barrels of oil per day – the level at which the government made its budget calculations.

To help cover its budget shortfalls, the government is keen to ensure it is collecting taxes efficiently, Osinbajo said.

“We will continue to consider the issue of raising tax and raising VAT. But at the moment we are more concerned with ensuring that we really improve our coverage,” he said, referring to tax collection.

On the missing Chibok schoolgirls, the vice president said the release of 21 of the girls in October was a result of government engagement with Boko Haram.

He did not provide any update on the remaining missing girls, but he said the government was continuing to engage with Boko Haram.