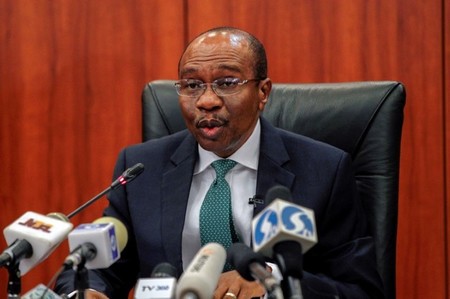 ABUJA (Reuters) – Nigeria’s monetary and fiscal authorities must cooperate on their policies to help Africa’s largest economy to develop, the central bank governor said, according to his spokesman.

Central Bank Governor Godwin Emefiele made the comments at a two-day retreat for members of the bank’s Monetary Policy Committee and the ministers for finance, budget and investment. The closed-door meeting, which takes place about three times a year, ended on Saturday.

OPEC member Nigeria is in its first recession in 25 years, largely brought on by low oil prices. Crude oil sales account for about two-thirds of government revenue.

The central bank has faced criticism from investors for keeping Nigeria’s currency, the naira, at a rate some 30 percent above the black market, where entrepreneurs are forced to go for foreign exchange with the dollar scarce on official channels.

“Godwin Emefiele reiterated the need for the country’s monetary and fiscal authorities to collaborate and harmonize standpoints so as to develop the economy rapidly,” central bank spokesman Olalekan Ajayi said in an emailed statement on Sunday.

The finance ministry has previously said adjustments were needed to narrow the spread between exchanges rates on the official and black market. The central bank devalued the rate for retail customers in February after Nigeria’s top economic advisor body called for an urgent review.

The bank’s Monetary Policy Committee is due to meet on Monday and Tuesday to set interest rates. Twelve out of 13 economists polled by Reuters predicted that the bank would leave its benchmark interest rate unchanged at 14 percent on Tuesday.

(Reporting by Camillus Eboh and Alexis Akwagyiram, in Lagos, editing by Larry King)