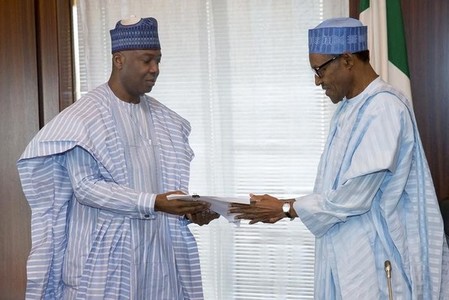 ABUJA (Reuters) – Nigeria’s upper house of parliament aims to consider the government’s 2017 budget on Thursday, the Senate president said, and could approve the spending plan the same day in the next stage of its marathon passage into law.

President Muhammadu Buhari, who has faced rising disenchantment over his handling of Africa’s largest economy, presented his record 7.298 trillion naira ($23.24 billion) budget to lawmakers in December.

“We will send out copies to you (senators) and the report will be considered on Thursday,” said Senate President Bukola Saraki. The budget could be passed on Thursday if senators do not seek to make changes.

A document published by the lower house, which also has yet to approve the budget’s contents, on Tuesday said the spending plan now totalled 7.44 trillion naira.

The budget must be passed by lawmakers before the president can sign it into law. President Buhari is on medical leave in Britain and on Sunday handed over power to his deputy Yemi Osinbajo.

Nigeria is in its second year of recession brought on by low oil prices which have slashed government revenues, weakened the naira currency and caused chronic dollar shortages.

Last year’s budget – passed in May 2016 – was delayed for months due to disagreements between lawmakers and the presidency, cutting the supply of government money and deepening the economic crisis.