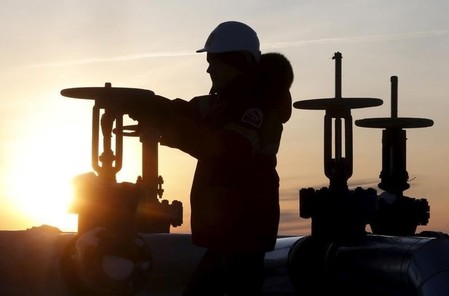 SINGAPORE (Reuters) – Oil prices fell on Thursday after OPEC said its production had risen to the highest level in at least eight years and following reports of an increase in U.S. crude stockpiles.

Traders said oil markets had come under pressure after the Organization of the Petroleum Exporting Countries (OPEC) reported a rise in output, despite the producer cartel having plans, potentially with non-OPEC producer Russia, to cut production in a bid to rein in a global glut.

OPEC on Wednesday reported its oil production climbed in September to the highest in at least eight years, and raised its forecast for 2017 non-OPEC supply growth, pointing to a larger surplus next year despite the group’s proposal to cut output.

“In the absence of any OPEC-Russia headlines to give crude its daily adrenaline shot, the market looks nervously to the EIA crude inventory figures due in the U.S. this evening,” Halley said.

The Energy Information Administration is due to publish official storage inventory data later on Thursday.

The private American Petroleum Institute reported on Wednesday that U.S. crude inventories rose by 2.7 million barrels to 470.9 million barrels in the week to Oct. 7. This would be the first rise in oil stocks following five straight weeks of declines.

“Seasonally softer gasoline consumption, flagging demand from China and the return of refineries from maintenance will likely drive up global stock levels over Q4,” BMI Research said, but added that it did not see stocks returning to 2015 highs.

But the market received some support from China, which imported record volumes of crude oil last month, eclipsing the United States as the world’s top buyer of foreign oil for the third time in a year, in a trend that could soon put the Asian nation at the top of the world’s oil import table permanently.

Oil imports hit a record despite a worse-than-expected 10 percent fall in Chinese exports and a 1.9 percent drop in imports that cast a gloomy outlook on its economy.