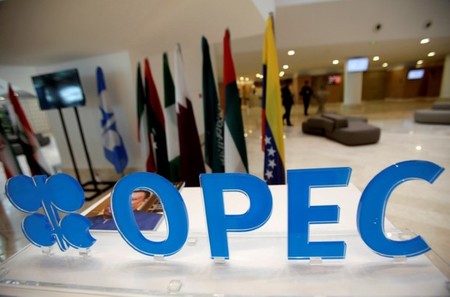 VIENNA (Reuters) – OPEC began on Wednesday debating a deal to curtail oil production and prop up the price of crude, with Iran and Iraq resisting pressure from Saudi Arabia to participate fully in any action.

Ministers from the Organization of the Petroleum Exporting Countries started an informal meeting at 0700 GMT at the Vienna Park Hyatt hotel and were due to begin a formal gathering at OPEC headquarters at 0900 GMT.

“There will be an agreement today,” an Iraqi delegate said as he entered the hotel.

“I’m optimistic,” said Iranian Oil Minister Bijan Zanganeh, adding there had been no request for Iran to cut output.

On Tuesday, Iran wrote to OPEC saying it wanted Saudi Arabia to cut production by as much as 1 million barrels per day (bpd), much more than Riyadh is willing to offer, OPEC sources who saw the letter told Reuters.

The 14-country group, which accounts for a third of global oil production, made a preliminary agreement in Algiers in September to cap output at around 32.5-33 million bpd versus the current 33.64 million bpd to prop up oil prices, which have halved since mid-2014.

OPEC said it would exempt Iran, Libya and Nigeria from cuts as their output has been crimped by unrest and sanctions.

The deal was seen as a victory for Iran. Tehran has long argued it wants to raise production to regain market share lost under Western sanctions, when its political arch-rival Saudi Arabia increased output.

In recent weeks, Riyadh changed its stance and offered to cut its output by 0.5 million bpd, according to OPEC sources, while suggesting Iran limit production at around 3.8 million bpd – in line with or slightly above the country’s current output.

Tehran has sent mixed signals, saying it wanted to produce as much as 4.2 million bpd. Iran’s letter to OPEC suggested Saudi Arabia should cut output to 9.5 million bpd.

Iraq has also been pressing for higher output limits, saying it needs more money to fight the militant group Islamic State. Iran and Iraq together produce over 8 million bpd, only slightly behind long-time leader Saudi with 10.5 million bpd.

The argument between Iraq and Saudi Arabia mainly focuses on whether Baghdad should use its own output estimates to limit production or rely on lower figures from OPEC’s experts.

Brent crude rose 1.5 percent on Wednesday to more than $47 a barrel after heavy losses a day earlier. [O/R]

Some analysts including Morgan Stanley and Macquarie have said oil prices will correct sharply if OPEC fails to reach a deal, potentially going as low as $35 per barrel.