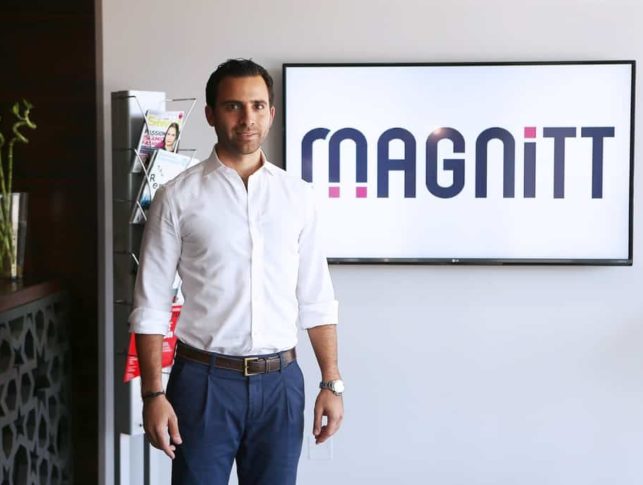 Philip Bahoshy and his groundbreaking company MAGNiTT are revolutionizing the start-up industry. What’s interesting is that MAGNiTT is itself a start-up firm. So how is Bahoshy simultaneously helping new companies, while nurturing his own venture through its infancy period? Bahoshy, 31, was raised in the U.K and has Iraqi roots. He obtained a BSc in Economics from the prestigious London School of Economics which he completed in 2006. In 2007, Bahoshy made a move to Dubai to work for the highly regarded management consultancy firm Oliver Wyman, where he immersed himself in the corporate world. He then made a move to Barclays Wealth in 2010 to work as the chief of staff for the CEO of the Middle East and North Africa (MENA) region.

A start-up for start-ups

His high-flying corporate career bestowed him with an acute understanding of the business and investment landscape in the MENA space. Upon completion of his Master’s degree in 2013, Bahoshy was looking to go solo and start his own firm. Armed with a slew of business ideas, he was keen to get the ball rolling; however, he struggled to find investment, guidance and concept validation. After speaking with other start-ups, Bahoshy came to realize that although Dubai was a vibrant and energetic hub for all kinds of business people, new firms weren’t always making the right connections. He described this as “start-ups struggling in isolation.” This realization gave birth to MAGNiTT, which Bahoshy founded late in 2014. He envisaged building an online ecosystem that would make life easier for start-ups to find the various supports they need, while enabling external parties to identify fledgling firms that they are interested in. Initially, MAGNiTT solely focused on linking start-ups with investment. He explained: “We identified that the real pain point in the region is access to angel funding – basically $100,000 to $250,000.” He elaborated, explaining that start-ups often struggle making the transition from setting up the firm with their own capital, to developing a viable business that is ready for substantial investment from venture capitalists. Linking start-ups with angel investors is often critical if firms are to bridge this gap.

An online pitching platform and more

Bahoshy already had other ideas about how MAGNiTT could develop and provide further services. Firstly, he realized that it can be bewildering for investors and other parties when trying to identify start-ups, and that his product needed to work seamlessly. He focused on making MAGNiTT a streamlined online portal where start-ups have to outline the core concepts of their product. They have to succinctly present their business idea and the problem it solves, their elevator pitch, their target market, the competition, and finally, monetization. External parties can filter and search profiles for concepts they are interested in, analyze the product outline, access further information and ultimately connect with firms that they want to start a dialogue with. Bahoshy was already aware that start-ups need more than just funding to get off the ground. He focused on bringing mentors, accelerator programs, service providers and co-founders to the ecosystem. For start-ups, they can request what kind of support they are looking for. According to MAGNiTT’s data, 58% of start-ups on the site have listed that they are looking for mentorship, 56% are interested in showcasing supports, while 26% are looking for legal support or backing.

In January, Bahoshy had a respectable 200 start-ups signed up to MAGNiTT. Since then the site has exploded and today there are over 1400 start-ups and thousands of users registered on the platform.The site is already helping to forge valuable connections that are taking start-ups to the next level. Bahoshy has said that he wants to bring resources such as video conferencing, legal, marketing and HR services to the site. Additionally, MAGNiTT has recently launched a blog alongside a raft of materials relevant for start-up firms. He is also looking to bring Venture Capitalists into the platform to assist start-ups later down the line. MAGNiTT is itself listed as a start-up on MAGNiTT. Uniquely, its own success is being defined by how well it creates opportunities for all of its parties. For Bahoshy it’s so far so good and he is currently in negotiations with interested investors. It looks as though MAGNiTT is set to take off while bringing other great business ideas along for the ride.