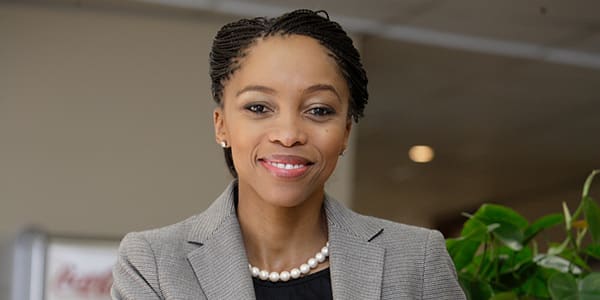 Phuti Mahanyele – an inspirational black business woman who believes that the poor representation of women in the boardroom of major businesses in the private sector is “not just a social injustice but an economic and business imperative”.

Phuti was born in Dobsonville, Soweto, South Africa on March 15th, 1971, however she largely grew up in the Claremont township outside Durban. Her mother died at the age of 42 in 1989 when Phuti was 17. Phuti has since acknowledged that this was a major turning point in her life as it made her for the first time realize how short life can be and why it is therefore so important to never take it for granted.

Throughout her life her parents continuously advocated the importance of education, never differentiating between their sons and Phuti and her two sisters.

Her father: a pioneer for the improvement of black education

Her father, Professor Mohale Mahanyele, was a successful business man and pioneer for the improvement of black education. Whilst the Chairman of the National Economic Education trust, he ensured that thousands of young people progressed into tertiary education. Throughout his life he refused to accept the fact that just because a child came from a home with insufficient funds to afford expensive higher education fees, they were not entitled to it. During his life he could have become one of South Africa’s richest men however he was never interested in making easy money, and instead believed in reinvesting both his money and time back into the people and places he loved.

Phuti was educated in Johannesburg until she was 17, at which point she moved to the United States where she attended Douglass College in New Brunswick, New Jersey. In 1993 she graduated with a degree in Economics and then went to De Montfort University in the United Kingdom where she obtained an MBA on “The Impact of International Trade on Black Economic Empowerment.” Her education didn’t end here because in 2008 she completed a course called “Global Leadership & Public Policy in the 21st century” at Harvard University.

Phuti’s first job was at her father’s company, National Sorghum Breweries, however whilst she admits to being very happy at this time of her life, she also confesses to feeling unfulfilled. After two failed applications she finally won an internship at Fieldstone – an investment banking firm in New York. After a difficult start, she flourished and achieved the position of Vice President before leaving 7 years later, at which time she moved back to South Africa.

Her next job, running the Project Finance Unit for the Development Bank of Southern Africa proved to be less successful and she left after only a few months. Looking back, she admits that it was a bad fit for her and not an environment she could continue to work in.

Whilst looking for other work she received a telephone call from Cyril Ramaphosa, the Chairman of a then relatively small company called “New Africa Investments” which became the Shanduka Group.

Phuti originally joined as the managing director of Shanduka Energy in 2004 and eventually went on to become the CEO of the Shanduka Group. It was whilst working there that she truly found her passion.

She has since admitted to finding Cyril so inspirational on their first meeting that she agreed to work with him even before she knew what the job and salary was.

Phuti speaks of the amazing culture and work ethic at the Shanduka group, admitting that Cyril’s astonishing humility and ability to inspire was fundamental to this. She has always felt hugely responsible and accountable to her community and working at the Shanduka Group allowed her for the first time to give something back, as the company, unlike so many others, didn’t just focus on the profit for shareholders.

Phuti adheres to 3 business pillars: understanding herself including her spiritually; understanding any issues affecting her staff, personal and professional; and ensuring she has all the information she needs at all times in order to be able to drive the business forward

When appointed CEO, her key priority was to ensure that the business moved some of its investments into areas that were less market sensitive, as she saw this as a way of ensuring the growth and security of the company’s investments in years to come. During her time at Shanduka she helped increase the company’s net asset value to approximately R8billion. Major deals driven by Phuti with Coca-Cola and McDonald’s were key to this success.

After 10 years at the Shanduka Group, Phuti has achieved a lifelong ambition and with the support of her business partner Jeremy Katzen, a highly experience banker from Johannesburg, has launched her own investment company called Sigma Capital.

Major influences on her life

Phuti often cites her family, notably her father as a major influence in her life, however she also frequently talks about the huge impact Cyril Ramaphosa has had on both her business and professional life.

Her parents taught her how to see beyond problems and challenges and to remain positive at all times. Phuti believes that every single person on earth has a purpose and that they are obligated to discover what it is and then achieve it.

Whilst attending a meeting in London, in 2013 Phuti was experiencing severe headaches, however she assumed it was just due to tiredness and tension. Whilst out shopping after the meeting she fainted, it was at this time she first sought medical attention. She was told to rest and returned to South Africa the following day, however on arrival she ignored the advice and went back to work where she then fainted again. When she woke up in hospital she was surrounded by friends and family, all of whom she didn’t recognize. It was at this time that she was told that she’d actually suffered from a stroke, hence her loss of memory.

Although she has now made a full recovery, the experience has changed her. Whilst she still has her incredibly high work ethic and puts in long hours, she is now also committed to finding a better work/life balance by valuing the importance of friends and family and not just achievements. She is in fact now engaged again (having already been divorced twice), and is learning to cook and play the piano. She admits to being excited and is looking forward to being a better wife and stepmother. “I feel ready to be a wife now”, she said.

When Phuti was asked what she would most want to be remembered for she said, “for having given as much of myself as I possibly could”.