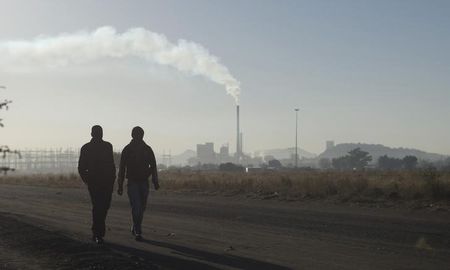 JOHANNESBURG (Reuters) – Lonmin said on Thursday it would continue to review its services and reduce costs, mainly through job cuts, as the sliding price of platinum bites further.

“Progress continues with the restructuring programme due to the new benchmarked operating model and removal of high-cost production to ensure the business remains viable,” Lonmin said in a statement.

Hurt by a 2014 strike, rising costs and a plunging platinum price, Lonmin raised $400 million through a cash call in December which failed to find favour with shareholders and priced shares at about a penny each.

Some of the proceeds of the rights issue were used to pay down debt, leaving the company with $69 million in cash at end of December.

The miner said production of refined platinum reached 171,441 ounces in the three months to the end of December, up 22.6 percent from a year earlier.

The price of platinum has been on the decline for about five years. It fell 26 percent last year and is trading at less than half its 2011 peak.

Shares in Lonmin have lost nearly all of their value over the last year. It was the worst-hit of three top platinum miners by the 2014 five-month labour stoppage.