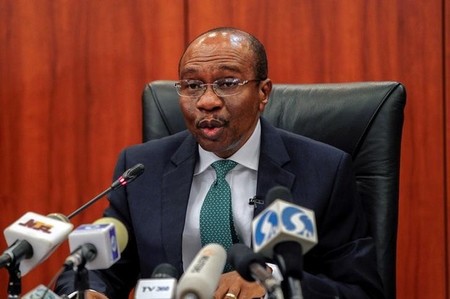 LAGOS/LONDON (Reuters) – Earlier this year, an open letter in the Nigerian media from a group of businessmen attacked the “shameful” record of central bank governor Godwin Emefiele and demanded that he should go.

With Africa’s largest economy in recession for the first time in 25 years, the letter reflects growing anger directed at Emefiele, whose insistence on keeping the naira artificially high is believed to have worsened Nigeria’s oil-price induced slump.

Three years into his tenure, the flak is flying around the 55-year-old career banker once admiringly described by colleagues as a discreet man who gives little away.

The advertisement, which appeared in several newspapers and online news portals, is the most prominent expression so far of widespread discontent with the government’s naira policy among senior figures from the worlds of business and investment.

“Whatever hard-won reforms we had, (the benefit) has been undone in the past two years by (Emefiele),” one of the signatories, accountant Feyi Fawehinmi, told Reuters. Another ad is being planned, he said.

Emefiele imposed currency restrictions in 2015, defying bankers’ advice to float the naira and raise interest rates as some other oil exporters had done. Investors fled as the once promising emerging market was ejected from key bond indexes.

Economists and investors say they have given up seeking any clues from Emefiele, who once read out a 32-page statement on interest rates without referring to the issue uppermost on his audience’s mind – the frozen naira.

They are scathing about Emefiele, citing policies that have choked off the flow of dollars to official channels, fuelled a naira black market and ravaged domestic industry.

“Emefiele is responsible for the currency mismanagement. If someone achieves to beat down a currency like that, then a foreign investor like me can’t support that,” Lutz Roehmeyer, director at Landesbank Berlin Investment, told Reuters. “Absolutely no one trusts or believes that this central bank is still able to fix this,” he said, describing the forex policy sarcastically as a “masterstroke” that destroyed the economy.

That policy accords with President Muhammadu Buhari’s desire for a strong currency.

A 74-year-old former military ruler, Buhari has reminisced publicly about the 1980s when the naira traded at 1.3 per dollar, apparently viewing currency strength as a matter of national pride.

But Kingsley Moghalu, a former central bank deputy governor, says that does not absolve Emefiele of blame.

“Of course, there are many concerns that the bank is not being run in an independent manner in terms of policy … But we all know that one of the burdens central bankers always have to carry is to do the right thing even if it is not popular,” said Moghalu, who teaches now at Tufts University.

“So I don’t care what excuse you give, what explanation you give – the result is what we are looking at.”

Emefiele recently eased his grip on naira rates by offering dollars to different users and there are now at least five exchange rates. Moghalu called the multiple rates “a perfect recipe for corruption”.

The central bank says a “managed float” is needed to offset low oil prices. It did not respond to requests for comment for this article and Emefiele declined interview requests.

Ordinary Nigerians are suffering widespread shortages of consumer goods, while factory closures, due to lack of raw materials and machinery, have caused job losses.

Nigeria’s economy is heavily import dependent. By not making dollars available on a transparent basis, the central bank drives importers to the black market. As a result, inflation has rocketed but there are also shortages of imported goods.

The only winners from this policy are the few who obtain dollars they can sell on the black market, while everyone else is a loser. Prices for rice, Nigeria’s staple food, have doubled in the two years since the policy came in.

“What are the measures take by the central bank to rescue our currency (sic). Please, Nigerians are crying,” read a comment posted on the central bank’s Facebook page on Feb. 13 as the naira black market rate fell below 500 per dollar.

To console such citizens, Emefiele has suggested his import curbs are rejuvenating domestic industry. In a March 11 speech, he rejected devaluation.

It was “an opportunity to change the economy’s structure, resuscitate local manufacturing and expand job creation,” the speech, posted on the central bank website, said.

But while Emefiele has cited domestic tomato processing as a beneficiary of the import curbs, one new plant has shut, unable to import machinery or tomatoes.

At a meeting of Nigeria’s top economic advisory body to discuss the currency – Emefiele said everything was “under control” and called for “patience”, according to a deputy state governor who attended the session.

He has also told reporters the naira will move in a 304-305 range, describing it as “a sort of floating market”.

Emefiele, who ran one of Nigeria’s biggest banks, Zenith, between 2010 and 2014, was appointed by then President Goodluck Jonathan. He replaced Lamido Sanusi who irked authorities by exposing a $20 billion scam at state oil firm NNPC.

After Buhari won the 2015 election, many expected Emefiele to join the list of Jonathan appointees who were fired. But the view now is that Emefiele suits Buhari, playing to the president’s desire for a strong currency.

One Nigeria-based banker said Emefiele remains in his job because he carries out Buhari’s wishes. A former government economic policymaker said the central bank chief’s relations with his deputy governors were poor but he felt he could ignore them because he had Buhari’s backing.

Neither Emefiele nor the central bank press office replied to request for comment on these allegations.

But he has some defenders, and while Buhari is in office, political analysts believe Emefiele will also remain in post. Buhari, however, has been scaling down his schedule since he returned from extended sick leave and is expected to have more medical treatment in London next month.

By crushing imports, Emefiele has balanced Nigeria’s current account and boosted hard currency reserves. Inflation may be starting to slow.

This month, Vanguard, one of Nigeria’s biggest dailies, named Emefiele “Personality of the Year”. The paper praised his “long-term strategy for strengthening the Nigerian economy” and efforts to build non-oil industry.

Emefiele has reduced public engagements and has not given interviews to foreign media in over a year. He did not attend a Nigerian investment roadshow this year, sending a deputy instead.

Perhaps that was down to his experience at last summer’s roadshow in London.

One investor at that meeting recalled Emefiele telling fund managers and analysts the naira was solid and there was no issue with the foreign exchange market. For that he was angrily berated by some investors present.

Most investors will want to see more than a floating naira before they return to Nigeria, said John Bates, a strategist at PineBridge Investments. A key question may be whether Emefiele completes his tenure, which runs until 2019.

“They need to find credible speakers. There is an element of mistrust in the market, and I am referring to the central bank and the presidency,” Bates said.