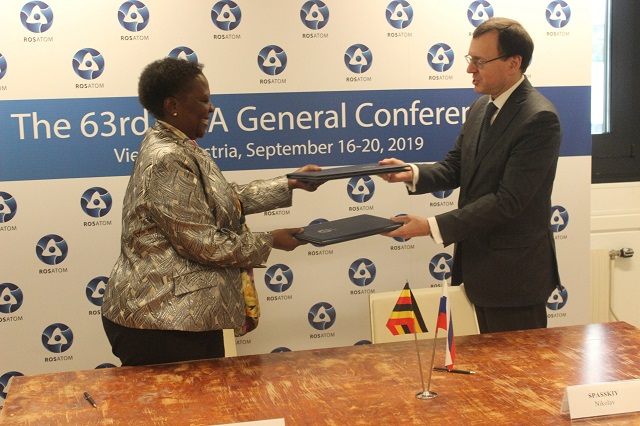 For several years now, Africa has been the new battleground of the world’s superpowers. But this has not been a war fought with guns, tanks, or fighter jets, but rather one fought with loans, supply contracts, and doing anything to be one up on your competitors.

The latest salvo in this ongoing economic war has been fired by Russia, or to be more exact by Rosatom, the Russian state corporation founded by Vladimir Putin in 2007 and which specialises in nuclear energy. A quick look at some of their statistics show just how big a player this corporation has become in 12 short years: largest electricity generator in Russia, producing almost 20% of the country’s electricity in 2017, ranks first in regards to foreign projects; 33 nuclear plants in 12 countries, leading provider of global uranium enrichment services with 1/3 of the world market, $300 billion of portfolio orders as of January 2017.

Energy and mining are the two sectors where Russia is particularly active in Africa, with Rosatom, Alrosa (mining), and Gazprom (natural gas extraction) leading the way.

With the formal signing of an agreement on September 18th of this year for Rosatom to build a nuclear reactor in Uganda (the Memorandum of Understanding having been signed in 2017), Russia and Rosatom have cemented their position on energy production even further.

It’s no surprise that nuclear energy is spreading across Africa. Three African countries (Namibia, South Africa, and Niger) are in the top 10 list of global uranium producers. Surveys by the Ugandan Ministry of Energy and Mineral Development estimate some 52,000 square kilometres of deposits across the country.

Rosatom are slowly spreading their reach across the continent. They are currently building a $29 billion nuclear reactor in Egypt, though 85% of that cost is covered by loans from Russia, a fact that has some commentators worried about what possible defaults could mean. Rosatom have also signed a deal to build a reactor in Nigeria, as well as signing MOUs with Republic of the Congo, Sudan, and Ethiopia. As well as infrastructure and supply contracts, Russia and Rosatom are also investing in human resources. They already have a scholarship programme running in Kenya and are training locals to work in the nuclear industry in several African countries with a view to establishing close and long term relationships.

With only one nuclear reactor, in South Africa, currently operating on the continent, it is still early days for the industry. And while Russia and China may be the current leaders in signing nuclear deals, don’t count out the USA just yet. While their once mighty 90% share of the global market has dramatically shrunk to around 20%, there is a renewed interest from the US State, Energy, and Commerce departments who are seeking to establish early relationships with countries who have long term plans to build a nuclear reactor in the future.

Nuclear the best option for Africa?

But for now, it is Russia and China leading the way, with Russia looking to have the edge across Africa. This new deal, while it may take many years to come to fruition, illustrates future paths for other African countries. And though there are currently no financial details available for the Ugandan deal, it would be no surprise if there were loans in place similar to the deal with Egypt. And with constant developments in the field of nuclear energy, deals and MOUs agreed now may see different technology being applied when the reactor plants actually come to be constructed. Rosatom has the RITM-200 series reactor, a small modular reactor which is currently installed on some ice-breaking ships and which are expected to be installed in land-based plants around 2027, the same approximate timeframe as when there will be a proper framework, both infrastructure and regulatory, in the sub-Saharan region.

Russia and Rosatom are playing a long game here, but with an eye of the growth of Africa’s population and industry which will demand cheap energy sources. If any regulatory framework can guarantee safety levels, then nuclear seems the best option for the rapidly growing continent.