S.Africa’s Zuma calls for action after S&P downgrade, rand up on Moody’s reprieve 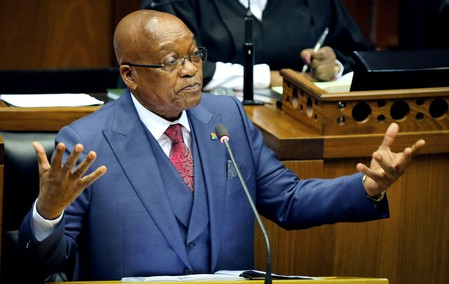 The rand recovered on Monday from steep falls suffered late on Friday after the downgrade, taking some relief from Moody’s decision to only place South Africa on review for downgrade.

A cut to “junk” on the local currency debt by both S&P and Moody’s could have seen South African debt lose its place in Citi’s World Government Bond Index (WGBI), the biggest of the global benchmarks and tracked by about $2-3 trillion of funds.

A proposal by a presidential commission to introduce free higher education should also be implemented in a “fiscally-sustainable manner”, the statement from Zuma’s office said.

As of 1527 GMT, the rand was trading at 13.7625 per dollar, 2.86 percent firmer than its New York close on Friday, when it had tumbled 2 percent following S&P’s announcement.

“The market is finding some relief in the fact that Moody’s has chosen to give us basically till February before they change our rating, if they do change our rating,” said Shaun Murison, currency strategist at IG Markets.

In fixed income, the yield for the benchmark government bond was down 9 basis points to 9.245 percent, also recovering after rising as much as 11 basis points earlier in the session.

Moody’s said the review will allow it to assess the South African authorities’ willingness and ability to respond to the rising pressures through growth-supportive fiscal adjustments that raise revenues and contain expenditures.

“The review period may not conclude until the size and the composition of the 2018 budget is known next February,” Moody’s senior analyst for South Africa, Zuzana Brixiova, said in a statement.

If nothing changes, the country will be downgraded to “junk” by all ratings agencies and the WGBI dream will be no more, at least for many a year, said Standard Bank chief trader Warrick Butler in a note.

“What this means, in terms of the currency, will be increased volatility.”

Falling out of the WGBI could have led to a larger sell-off in bonds, even though rising yields could present a buying opportunity for some yield-hungry investors.

“If you look at some of the metrics the real yields are among the highest in EM, the domestic curve is extremely steep, the current account is in better place than it was three to four years ago and the rand is quite competitive against likes of (Russia’s) rouble or Brazilian real,” said London-based Paul Greer, senior trader at Fidelity International.

“On the local side the real yield and steepness of curve look attractive from tactical perspective.”

Analysts said an exclusion from the Barclays index would lead to outflows of about $2 billion, compared with more than $10 billion if South Africa was to fall out of Citi’s WGBI.