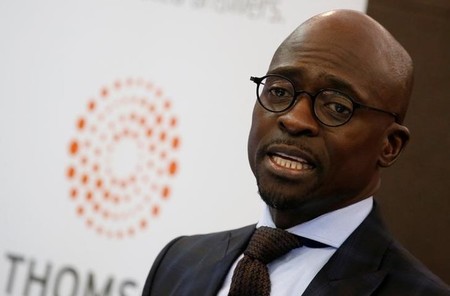 By Olivia Kumwenda-Mtambo and Mfuneko Toyana

JOHANNESBURG (Reuters) – South African Finance Minister Malusi Gigaba laid out an ambitious 14-point programme on Thursday to wrench the economy out of recession that included the sale of non-core assets and partial privatisation of state-owned firms.

The plans to stimulate growth in the continent’s most industrialised economy appear to represent an ideological shift by the African National Congress (ANC), whose political alliance with the unions has tended to make privatisation a dirty word.

A team commissioned by President Jacob Zuma to review state firms last year recommended that some should be sold. Now the government has set a date – March 2018 – by which to roll out a “private sector participation framework”.

“All of these items that we have announced … they constitute an important intervention to restore confidence and demonstrate action, and outline an action plan that we as government can be responsible for,” Gigaba said.

The government would also reduce the number of debt guarantees to this firms, especially those extended for operational purposes, he said.

“I’m not sure how far he is going to be able to get with this because I think ideologically there’s a lot of opposition,” NKC African Economics analyst Gary van Staden said.

“The last time I heard the ANC even talk about privatisation or even talk about sale of state owned assets on any kind of level is when Thabo Mbeki was president. It’s been a long time.”

South Africa’s economy entered recession for the first time since 2009 in the first quarter and is also struggling with high unemployment and credit ratings downgrades.

The state of the economy is adding to the pressure on Zuma, who is also facing persistent corruption allegations and increasing calls for him to stand down from within the ANC. Parliament will hold a no-confidence vote on Zuma next month.

Many of South Africa’s 300-odd state-owned companies are a drain on the government’s purse. Ratings agencies have singled out some as threat to its overall investment grade rating.

The firms, known as “parastatals” in South Africa, include companies such as South African Airways, power utility Eskom and logistics group Transnet that are regarded as central to the functioning of the economy.

Gigaba did not say what would be going under the hammer first, saying that would be determined by an audit.

“It’s very difficult to say at this stage. He was quite cagey on what sales of non-core assets he was referring to,” Schultz said.

South Africa sold its stake in mobile phone firm Vodacom in 2015 to as part of a 23 billion rand capital raising for Eskom.

Schultz said it might try to sell similar stakes, rather than embracing formal privatisation.

“In much the same way as government sold down their stake in Vodacom, the government is looking to do similar things to try and raise some revenue in the near term,” he said.