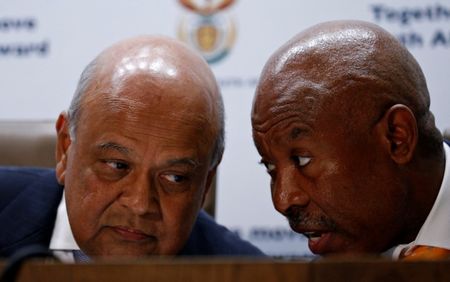 The rand firmed to well below the 15 mark against the dollar, while banking stocks climbed again after surging almost 9 percent on Monday.

By 1500 GMT, the rand had gained 0.9 percent to 14.9595 per dollar, just off its firmest since Nhlanhla Nene was unexpectedly axed as finance minister by President Jacob Zuma last Wednesday, a move that triggered a market meltdown.

Investors were deeply troubled by Zuma’s appointment of the untested David van Rooyen to the crucial Treasury post, forcing an abrupt U-turn on Sunday when the president gave the job to Gordhan, who was finance minister from 2009 to 2014.

The rand also benefited from greenback selling as local traders sought to unwind long-dollar positions ahead of a meeting of the U.S. Federal Reserve, whose policy committee (FOMC) is expected to raise interest rates on Wednesday.

South African markets will be closed on Wednesday for a public holiday.

The dollar slipped to a seven-week low against a basket of currencies on Tuesday amid growing jitters over the message the Fed will seek to send on interest rates on Wednesday, buoying most emerging market currencies.

South African government bond yields fell across the curve on Tuesday, extending the previous session’s rally. At 1500 GMT, the yield on the benchmark paper due in 2026 had shed 45 basis points to 9.55 percent.

On the equities front, banking stocks added another 2.94 percent, bringing the Banks’ Index to 5,966.64. It remains about 9 percent below the levels it had reached before Nene’s shock sacking last week.

The banking rally helped pull the benchmark Top-40 Index up 0.66 percent to 43,701 while the wider All-share index added 0.72 percent to 48,429. Trade was robust with around 322 million shares changing hands.