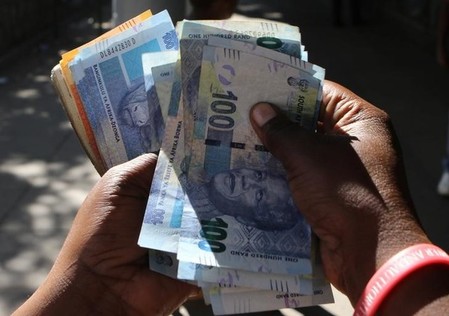 JOHANNESBURG (Reuters) – The rand pulled back from the previous session’s four-week highs against the dollar on Wednesday and traders said South African GDP data expected to show a small contraction in the first quarter could add pressure on the currency.

The rand has gained as much as 5 percent against the dollar since Friday, reaching 14.7995 on Tuesday in a relief rally prompted by S&P’s decision to maintain South Africa’s investment grade BBB- rating.

The currency however gave back some of those gains on Wednesday to trade at 14.9175/dollar by 0650 GMT, down 0.1 percent from the previous session’s close.

Traders saw a risk to the currency from Statistics South Africa’s GDP data due out at 0930 GMT, with economists polled by Reuters expecting the economy to have shrunk 0.1 percent on a quarter-on-quarter annualised basis in the first three months of the year.

“If this is indeed the case there is not much chance the rand will be able to continue its journey lower (firmer),” Standard Bank trader Warrick Butler said in a note to clients.

Another rand-moving headline could be a review from Fitch, which is also expected to retain its own BBB- rating on Africa’s most industrialised economy, although it could change the outlook to negative from stable.

Fitch has not set a date for its announcement, but the Treasury has said it expects it on June 8.

In fixed income on Wednesday, the yield on debt maturing in 2026 was flat at 9.1 percent.

The JSE securities exchange’s Top-40 futures index was down 0.4 percent, pointing to a slightly weak start for the local bourse at 0700 GMT.