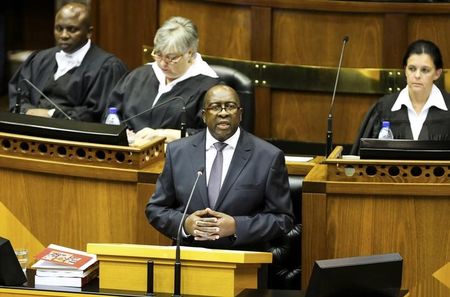 CAPE TOWN (Reuters) – South Africa will borrow $4.5 billion from international markets over the medium term with government debt set to rise to nearly 2.4 trillion rand by 2018/19, the National Treasury said on Wednesday.

New bond issuance for 2015/16 would rise to 175 billion rand, marginally up from the 173 billion rand estimated in February.

Treasury said borrowing requirement would rise over the next three years, with borrowing for 2015/16 fiscal year revised to 176.3 billion rand forecast in February’s main budget before gradually rising to reach 186.1 billion rand in 2017/18.

Treasury said it would focus on mitigating the risk of sharp increases in loan repayments, and would continue its program of switching short-dated bonds in exchange for longer-dated ones.

“Further rand depreciation and higher inflation would push up the level of debt and debt-service costs,” Treasury said.

The rand has lost over 13 percent in value against the dollar in 2015 as combination of weak domestic factors and slowing growth globally, particularly in China, have seen the unit tumble to all-time lows.

Minister Nhlanhla Nene said the rise in government debt over the next three years would amount to 600 billion rand, while stabilizing as a percentage of GDP to 49.4 percent in 2018/19.