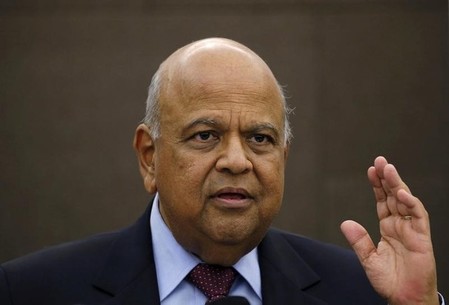 By Joe Brock and Mfuneko Toyana

JOHANNESBURG (Reuters) – South African assets slumped on Wednesday after an elite police unit summoned Finance Minister Pravin Gordhan over an investigation into a suspected rogue spy unit in the tax service, fuelling speculation that there was a plot to oust him.

Gordhan and other former officials at the South African Revenue Service (SARS) must report to the Hawks on Thursday morning in relation to contravention of surveillance regulations, a source close to the matter told Reuters.

The announcement added to investors’ worries about leadership at the finance ministry as Africa’s most developed economy teeters on the edge of recession and credit rating agencies consider downgrading it to “junk” status by year-end.

“The arrest of the finance minister would shatter investor confidence, risk a sovereign ratings downgrade and be a disaster for the already fragile zero growth, zero jobs economy in South Africa,” the member of the opposition Democratic Alliance said in a statement.

The Treasury confirmed the Hawks had contacted Gordhan and that he was seeking legal advice, but declined to go into further details.

Gordhan is due to speak at a debate in Cape Town at 7 p.m. (1700 GMT). Hawks spokesman Hangwani Mulaudzi said it did not comment on ongoing investigations.

The rand extended losses after dropping 3 percent the previous session when the news about Gordhan emerged.

A Zuma-backed plan to build a fleet of nuclear power plants, at a cost of as much as $60 billion, has been a cause of tension with the Treasury for months and is likely adding to pressure on Gordhan’s position, analysts say.

“This is all part of a plot to oust Gordhan,” political analyst Prince Mashele said. “Gordhan refuses to sign-off on the Russian nuclear deal.”

Gordhan has refused to be drawn publicly on whether he supports the nuclear project but has said South Africa will only enter agreements it can afford.

Presidency spokesman Bongani Majola did not respond to requests for comment.

Local media reports in May said Gordhan may face arrest on espionage charges for setting up the unit to spy on politicians including President Jacob Zuma.

Zuma has rejected allegations by opposition parties that he has failed to publicly back Gordhan, saying that the law should take its course.

Nene’s refusal to sign-off on the nuclear deal contributed to his downfall, government sources said at the time.