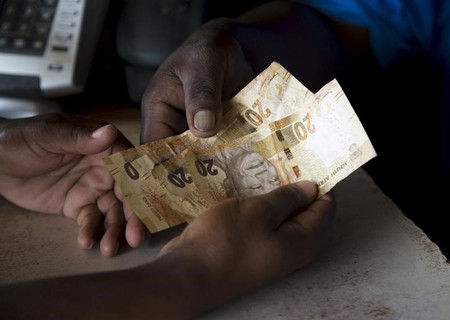 JOHANNESBURG (Reuters) – South Africa’s rand raced to a one-month high against the dollar on Monday and government bonds firmed as investors cheered Moody’s decision to change the country’s credit outlook to stable from negative while affirming an investment-grade rating.

While the decision to affirm the rating was widely anticipated by market participants and largely priced in, the unexpected move to revise the rating outlook boosted markets.

In fixed income, the yield for the benchmark government bond due in 2026 dipped 10 basis points to 7.89 percent, reflecting firmer bond prices.

“What surprised markets on Friday is that Moody’s upgraded the rating outlook from negative to stable – which means that a downgrade is no longer likely even in the medium-term, unless of course new developments overtake us,” Commerzbank analysts said.

On the bourse, banks bucked the weaker trend on the broader market, rising 0.65 percent with FirstRand up 0.8 percent to 69.26 rand.

Banks, considered the barometer of both political and economic sentiment, have largely borne the brunt of previous credit ratings downgrades given their substantial exposure to sovereign debt and various state-owned companies.

A downgrade to a “junk” rating by Moody’s would have seen South Africa removed from Citi’s World Government Bond Index (WGBI) and could have triggered up to 100 billion rand ($8.58 billion) in asset sales by foreign investors.

Moody’s is the only major ratings agency that rates South African debt as investment grade after S&P Global Ratings and Fitch downgraded the sovereign to “junk” status last year following a deterioration in the country’s economic outlook.

South Africa has this year seen a return of sorely needed investor confidence since President Cyril Ramaphosa replaced scandal-plagued Jacob Zuma, who resigned in mid-February on the orders of the ruling African National Congress party.

The interest rates decision will be announced on Wednesday.

Forward rate agreements were on Monday pricing in a 94 percent chance of a 25 basis points rate cut in the benchmark lending rate, up from an 80 percent chance two weeks ago.

“We expect SARB to shift to an easing bias this year,” UBS analysts said. “Still, nominal and real yields should remain attractive compared to peers and support the return outlook for the rand.”