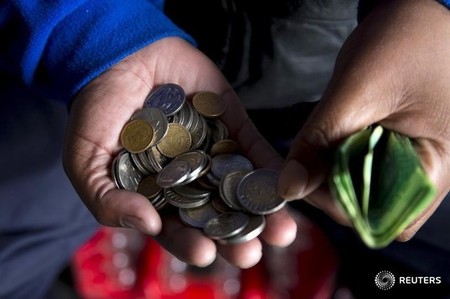 JOHANNESBURG (Reuters) – South Africa’s rand stayed on the back foot against the dollar early on Wednesday a day after central bank data showed a wider-than-expected current account deficit.

The local currency had fallen as much as 1.5 percent to its weakest in more than a week on Tuesday after the South African Reserve Bank said the current account deficit widened to 5 percent of GDP in the first quarter of this year 4.6 percent.

Government bonds edged higher, and the yield for the benchmark instrument maturing in 2026 eased 3 basis points to 9.17 percent.

“Local data this week has not provided any comfort for the local unit and this, long with markets bracing for a number of significant events, has seen the rand remain firmly under pressure,” Nedbank said in a market commentary.

Traders and analysts said markets were focused mainly on the U.S. Federal Reserve’s policy meeting later on Wednesday while the prospect of Britons voting to leave the European Union at a June 23 referendum had dampened risk appetite.

On the equity market, the JSE exchange’s All-Share index was up 1 percent in early trade, while the benchmark Top-40 index added 0.9 percent.