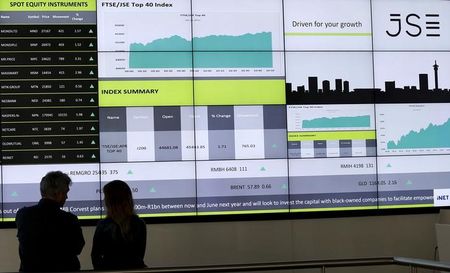 JOHANNESBURG (Reuters) – South African stocks fell by more than 2 percent on Friday as investors priced in a possible downgrade from ratings agencies, while the rand rallied as the greenback failed to make meaningful gains.

Standard & Poor’s kept South Africa’s credit rating at BBB- on Friday but changed its outlook to negative from stable, saying this reflected the view that economic growth might be lower than expected.

Fitch, which was due to issue its rating statement later, rates South Africa at “BBB” with a negative outlook and warned of a possible downgrade in September.

“The market pricing in a bit of weakness coming in from the expected downgrade from Fitch and S&P later today. We are seeing weakness across the board,” said Ryan Woods, a trader from Independent Securities.

Furniture retailer Steinhoff fell 7.23 percent to 77 rand after the company said it was being investigated by the German authorities for the accounting of certain transactions by its German unit.

MTN Group fell 3 percent to 135.74 rands after Nigeria’s telecoms regulator said it had cut a fine on Africa’s biggest mobile firm by 25 percent to $3.9 billion, and blamed a typing error for an announcement on Thursday it had reduced the penalty by 35 percent to $3.4 billion.

On the forex market, the rand inched up, having fallen briefly to 14.3500 to the dollar after S&P’s outlook downgrade.

The dollar was nearly flat against the euro despite stronger-than-expected U.S. monthly jobs data, as markets continued to digest Thursday’s unexpectedly small stimulus from the European Central Bank.

“It shows that there is a lot priced in this market and as a consequence when the data comes through there isn’t much follow through,” said Barclays Africa currency strategist Mike Keenan.

The yield for the benchmark instrument maturing in 2026 rose by 1.5 basis points to 8.650 percent, after touching its highest since late Fed 2014 in early trade.