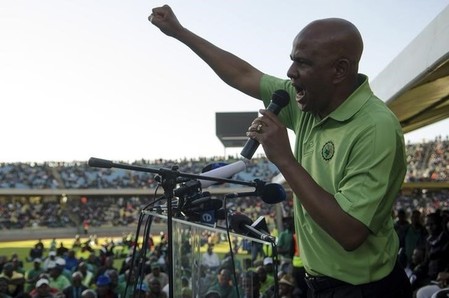 JOHANNESBURG (Reuters) – The largest union in South Africa’s platinum industry said on Thursday it would be demanding higher wages for its members when it begins wage talks next week with Anglo American Platinum, Impala and Lonmin.

The union will seek a net salary of 12,500 rand ($853) as minimum wage for its lowest paid members who now take home around 8,000 rand or a 56 percent increase, and a 15 percent hike for higher paid employees when the talks start on July 12.

“At the rate that inflation is running I think surely we should push every worker in the mining sector to be (earning) 12,500 rand,” AMCU’s president Joseph Mathunjwa told reporters, adding that he would push for a one-year wage agreement.

The platinum firms did immediately respond to requests for comment.

While South Africa is by far the world’s largest platinum producer, the industry has been squeezed by rising costs, labour unrest and plunging global prices for the commodity.

Demand for the metal used to build emissions-cutting catalytic converters in automobiles has also been tepid.

The union made similar pay demands during the platinum wage talks in 2014 as well as in the gold sector in 2015, saying it was seeking “a living wage” for its members.

In both instances the hardline union was unsuccessful, which triggered a record five-month work stoppage in the platinum sector in 2014. The union did not hold a pay strike in 2015.

The companies are still recovering from the 2014 strike with Lonmin and Implats forced to raise cash from investors and Amplats hastening its mechanisation drive through sales.

“We will be approaching these wage negotiations with both parties respecting each other because they know what we are capable of,” Mathunjwa told Reuters.

This year’s wage-bargaining season has kicked off in the power, automotive and mining sectors, with some demands ranging from 13 to 20 percent, far above the current inflation rate of 6.1 percent.