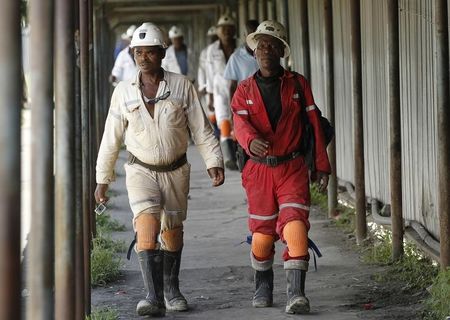 JOHANNESBURG (Reuters) – South Africa’s Competition Tribunal said on Tuesday it was weighing its approval of Sibanye Gold’s plan to acquire platinum mines over concerns that 510 jobs could be lost if the deals proceed.

Both transactions were approved by the Competition Commission, which investigates deals for any anti-trust issues, on condition that no jobs would be lost and the firms would keep the black empowerment policy to protect small businesses.

The government has set empowerment goals to redress the absence of South Africans excluded from the mining industry under apartheid in a policy meant to spread economic wealth to the black majority.

Sibanye has sought to have these conditions amended to allow for layoffs, the Competition Tribunal, which makes a final ruling on proposed mergers or acquisitions, said in a statement.

Sibanye argued in favour of layoffs at a hearing held by the Tribunal on Monday that was attended by unions, reports said.

Sibanye’s CEO Neal Froneman was quoted by Business Day newspaper as saying the deal might not proceed without retrenchments.

Froneman was not available to comment when Reuters tried to reach him.

The Tribunal is expected to make a final decision soon.

About 250 job would be lost through the merger with a further 260 jobs expected to be cut should Sibanye combine all its mining operations and head offices with the target companies, causing an overlap of important positions.

Competition Tribunal spokeswoman Chantelle Benjamin said labour unions and the Competition Commission lobbied for jobs to be cut only after three years while Sibanye proposed two years. She said most of the jobs lost would be at the head offices and senior management.