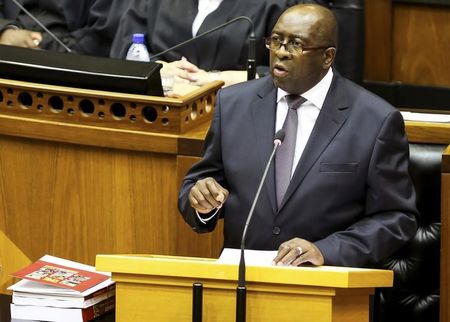 The rand remained on fragile ground against the dollar as investors fretted about a possible credit rating downgrade.

“We are always on the lookout for such. We are always on alert. If it does happen, it will have an impact on markets,” Finance Minister Nhlanhla Nene told Reuters before the South Africa-China bilateral talks in Pretoria.

Traders said investors were focused on Friday’s reviews from Fitch, which rates South Africa at BBB with a negative outlook and warned of a possible downgrade in September, and from Standard & Poor’s, which has it at BBB- with a stable outlook.

“The currency situation is doing what it is supposed to do,” Nene said. “Our floating exchange rate serves as a shock absorber when it comes to external shocks and we have seen that happening. It supports our manufacturing and export industries.”

Nene backed a decision by the central bank, which raised interest rates to 6.25 percent last month, citing that the priority for monetary policy was to keep inflation within a 3-6 percent target range.

Headline consumer inflation ticked up to 4.7 percent year-on-year in October compared with 4.6 percent in September.

“It is meant to send a signal to try and deal with inflation expectations. I think it was timely,” Nene said.