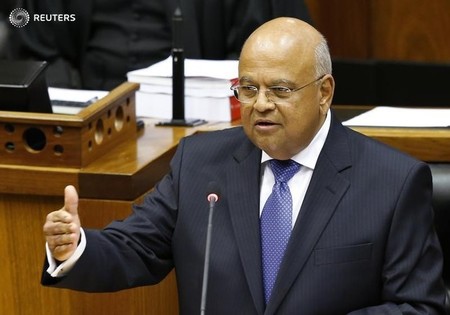 Gordhan has expressed concerns at the leadership of the South African Revenue Service (SARS), saying earlier this week he could not vouch for the accuracy of the information it provided because of a lack of accountability and cooperation from its top management.

SARS said in a statement on Thursday it was concerned over the comments questioning the integrity of its leadership.

News of the latest investigation adds to the impression of a system in turmoil after months of tension between President Jacob Zuma and the finance minister, who himself survived a separate probe into allegations of fraud while he was the head of SARS.

The tensions have unnerved investors at a time when Africa’s most industrialized economy is stalling, with growth forecast at 0.5 percent this year by the Treasury.

An 8-member team set up by the Treasury to investigate governance at SARS said in a presentation to parliament, seen by Reuters, that it was studying whether the agency was sufficiently accountable and had the capacity to deal with illicit financial flows.

It was unclear when the probe was initiated, but Business Day newspaper quoted the head of the committee, Dennis Davis, as saying it had been carrying out its work for several months.

Davis could not be reached for comment at the number provided on the committee’s website. SARS spokesman Sandile Memela and Treasury spokeswoman Yolisa Tantsi did not immediately reply to telephone and email requests for comment.

“The implication is that he has a lack of confidence in the top leadership at SARS,” political analyst Daniel Silke said, referring to Gordhan.

Gordhan and SARS commissioner Tom Moyane, who was appointed in 2014 by Zuma, were at loggerheads earlier this year when Moyane refused to halt an operational turnaround plan that had been vetoed by the minister.

At the time, media reported that Gordhan had threatened to resign from the cabinet unless Moyane was removed from his role.