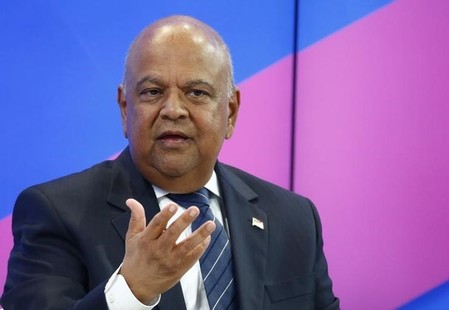 JOHANNESBURG (Reuters) – South African Finance Minister Pravin Gordhan said on Monday he sees a “difficult political year” for the ruling African National Congress (ANC) but that he saw “green shoots” of growth in an economy that is barely growing.

The ANC has a major policy conference at the end of June and late this year will pick a new party leader to replace President Jacob Zuma as its candidate when his second term ends in 2019.

In an interview with the eNCA TV news channel before the unveiling of his annual budget on Wednesday, Gordhan said: “We seem to be improving slightly on the growth side, seeing some green shoots which we will describe for you on Wednesday.”

“At the same time we have our challenges,” he said, including: “A difficult political year for the ruling party which will create its own dynamics.”

Asked about fraud charges that were brought against him last year and then dropped, Gordhan said: “That kind of abuse is totally unacceptable in our kind of young democracy.”

That saga unsettled markets and led to speculation that Zuma and his allies wanted to remove Gordhan, who commands huge respect among investors.

There has been widespread media speculation that Zuma, who has called for “a new chapter of radical socio-economic transformation”, still wants to replace Gordhan.

The political noise comes against the backdrop of a tough economic situation.

In his October mid-term budget statement to parliament, Gordhan cut the 2016 economic expansion forecast to 0.5 percent from the 0.9 percent previously predicted by the Treasury, but said GDP growth would recover to 1.3 percent next year.