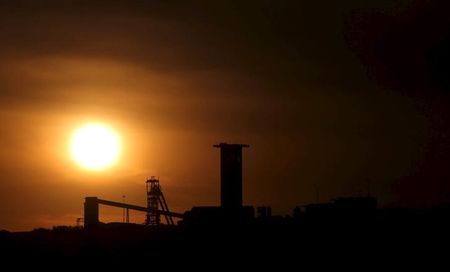 JOHANNESBURG (Reuters) – South African bullion producer Harmony Gold on Thursday reported a smaller first quarter loss and said it aimed to wipe out its debt over the next two years.

Harmony said headline loss per share for the three months to end-September totalled 120 cents from a loss of 725 cents in the preceding quarter mainly due to benefits from restructuring and optimising efforts resulting in higher production.

The loss was mainly due to 14 percent weakening of the rand against the dollar in the period, the company said.

South Africa’s gold industry is being squeezed by falling prices and rising costs such as electricity and labour and companies are slashing costs to stay afloat.

Chief financial officer Frank Abbott told reporters on a conference call that the company intended to repay all its debt over the next two years before spending on its Golpu mine in Papua New Guinea intensified.

“The intention is to repay our debt over the next two years so when the bigger funding starts at Golpu we are sitting with a balance sheet without debt,” he said.

Harmony, which reaps about 90 percent of its gold from South Africa, expects to start a study on the second stage of development of its Golpu mine by December 2015.

Harmony said it expected the gold price to remain flat in the medium term but expected a long term recovery due to gold being used as an investment tool and store of value.