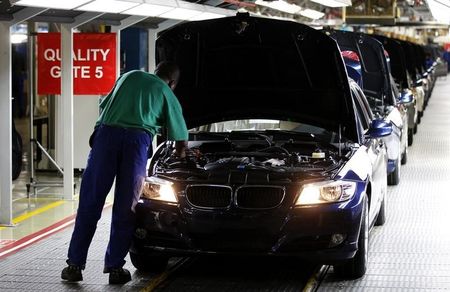 PRETORIA (Reuters) – South Africa’s current account deficit widened to 5.1 percent of gross domestic product in the fourth quarter of 2015 from a revised shortfall of 4.3 percent in the third quarter, the central bank said on Tuesday.

Economists surveyed by Reuters had expected a 4.35 percent gap for the fourth quarter.

Year-on-year, the current account deficit shrunk to 4.4 percent of gross domestic product compared to a 5.4 percent deficit in 2014.

Exports slumped while imports rose during the quarter, leading to a sharp increase in the trade balance deficit to 57 billion rand ($4 billion) compared with a revised 22 billion rand gap in the third quarter, the reserve bank said in its quarterly bulletin.

“The bank has officially identified November 2013 as the upper turning point in the business cycle, implying that the South African economy is now officially in a downward phase,” the central bank noted.