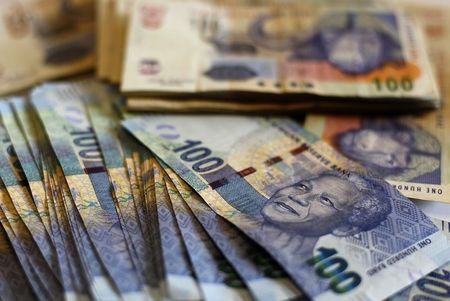 JOHANNESBURG (Reuters) – South Africa’s rand edged up against the dollar on Friday, mainly reflecting the greenback’s weakness against a basket of currencies and also buoyed by data showing a narrower South African trade deficit in September.

The Top-40 index on the Johannesburg Stock Exchange ended in the black for the first time this week as traders showed appetite for resource shares and renewed confidence in Africa’s largest mobile operator.

The local currency was however still down 1.5 percent this week to the dollar, partly due to week-long protests against high university fees which highlighted the economic woes facing Africa’s most developed economy, and dented investor sentiment.

The rand has also been under pressure for much of this year, as investors anticipating the start of policy tightening in the United States dump high yielding but riskier emerging markets.

On the debt market, the benchmark government bond due in 2026 edged higher, with the yield shedding 6 basis points to close at 8.34 percent.

South African stocks ended positive for the first time this week, driven by strong gains in the resource sector, spurred by an appetite for shares in Anglo American.

The diversified miner was the biggest winner on the blue-chip Top-40 index climbing more than 3 percent to end at 116.46 rand.

Shares in mobile giant MTN Group shot up as high as 3 percent, its first gains this week, after slumping about 20 percent since Monday when it was fined $5.2 billion for failure to cut off users with unregistered SIM cards.

“The general feeling is that the fine will more than likely be reduced to something more manageable, like $1 billion,” Inkunzi Wealth Group senior trader, Petri Redlinghuys, said.