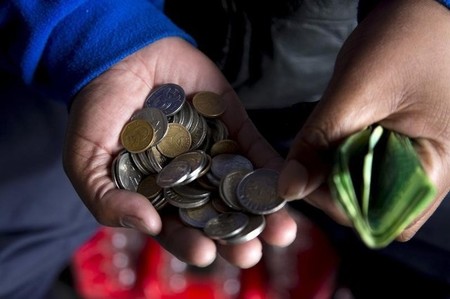 JOHANNESBURG (Reuters) – South Africa’s rand firmed against the dollar early on Thursday as the greenback slipped after the U.S. Federal Reserve stuck to its mildly upbeat economic view but gave no hint of accelerating rate hikes.

* At 0645 GMT, the rand traded at 13.3775 per dollar, 0.76percent firmer from its New York close on Wednesday. * The dollar index, which tracks the greenback against abasket of six major rival currencies, fell 0.15 percent to99.496. * The Federal Reserve on Wednesday held interest ratessteady in its first meeting since U.S. President Donald Trumptook office. * While painting a relatively upbeat picture of the U.S.economy, the Fed gave no firm signal on the timing of its nextrate move with the economic impact of Trump’s policies yet to beseen. * Stocks were set to open lower at 0700 GMT, with the JSEsecurities exchange’s Top-40 futures index down 0.6 percent. * In fixed income, the yield for the benchmark governmentbond due in 2026 dipped 1.5 basis points to 8.845 percent.