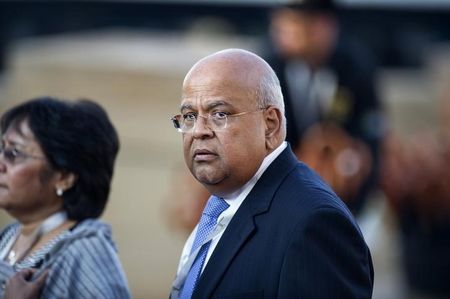 Zuma gave Gordhan the job late on Sunday, in a dramatic U-turn that gave Africa’s most industrialised economy its third finance minister in a week.

Just four days earlier, the president had sacked Nhlanhla Nene as finance minister and given the job to David van Rooyen, a relatively unknown lawmaker and Zuma loyalist – a move that had triggered a wave of criticism and a sell-off on the markets.

South Africa is gearing up for local elections next year where the ruling African National Congress (ANC), is expected to face stiff competition from the opposition Democratic Alliance in urban areas, including the economic hub of Johannesburg. The countryside remains an ANC stronghold.

Even some supporters of the ANC, Nelson Mandela’s erstwhile liberation movement that has ruled since the end of apartheid in 1994, expressed dismay about Wednesday’s appointment of a Zuma loyalist to the crucial post. They also described his latest appointment as a sign Zuma was losing control.

“It may not be his death knell, but it’s certainly the turning of the tide,” a former senior anti-apartheid activist and ruling ANC legislator Ben Turok.

The currency fell nearly 9 percent last week following the removal of Nene, a civil servant veteran who was keen to rein in government spending.

“The markets will welcome back Gordhan to National Treasury,” Rand Merchant Bank’s currency strategist John Cairns said. “He is a known entity, is his own man and did well when in the post previously. But it is certainly unreasonable to expect all of last week’s losses to be reversed — a huge amount of uncertainty has been created in the past few days.”

Yields on government bonds recovered sharply in early trade, with the benchmark paper due in 2026 down 101 basis points at 9.37 percent.

The rally may also be limited if the Federal Reserve, the U.S. central bank, raises interest rates on Wednesday – a move set to put emerging markets like South Africa under strain.

“Markets should rally back very strongly but I would not expect a total retracement with a permanent loss of trust in leadership even if we are in a better place,” said Peter Attard Montalto of Nomura in London.

The removal of Nene also led to a selling frenzy in South African banking stocks, which dropped nearly 20 percent on investor worries that the country’s credit rating would slip into “junk” status.

On the bourse, the banking index shot up 12 percent, having dropped nearly 20 percent after Nene was removed.

The Johannesburg Security Exchange’s broad All-Share index was up 2 percent to 49,051 points by 0734 GMT.

Zuma said the about-face decision was prompted by many calls to rethink his decision.

South Africa’s Beeld newspaper, citing an informed person, said Gordhan’s appointment was preceded by a crisis meeting between Zuma, politicians and representatives of the private sector on Sunday afternoon.