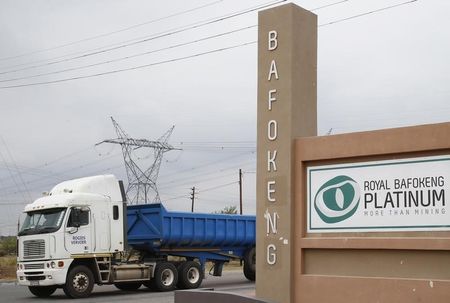 JOHANNESBURG (Reuters) – South Africa’s Royal Bafokeng Platinum will delay the ramp up of its new mine by a year as commodity prices sink to near seven-year lows, the company said on Tuesday.

“Delaying the start of stoping at Styldrift I ensures that value is not destroyed by ramping up high quality Merensky ounces into a depressed market but that instead the business is well positioned to begin ramp-up when the market improves,” Bafokeng said.

Styldrift, with an estimated lifespan of more than 60 years, is a high grade, shallow mechanised mine in the North West province, about 100 km (62 miles) from Johannesburg.

Drilling at Styldrift could be further delayed from the first quarter of 2017 – after being pushed back from the third quarter of this year – if prices sink further, Bafokeng said.

The company had spent 5.19 billion rand ($361 million) by the end September on developing Styldrift, which is still expected to produce 2.76 million tonnes per year.

Spot platinum has recovered from seven-year lows of $851 hit on Friday on concerns about oversupply and slowing demand in top consumer China, but is still at levels last seen in 2008.

In the third quarter, Bafokeng cut its capital expenditure at Styldrift by 32 percent compared to the previous quarter on lower platinum prices while also slashing other “non-critical” spending.

Shares edged up 0.25 percent to 23.73 rand outpaced by the 1.17 percent rise in Johannesburg’s All-Share index.

Africa, Business, Latest Updates from Reuters South Africa’s RBPlat delays ramp up of Styldrift mine due to low prices