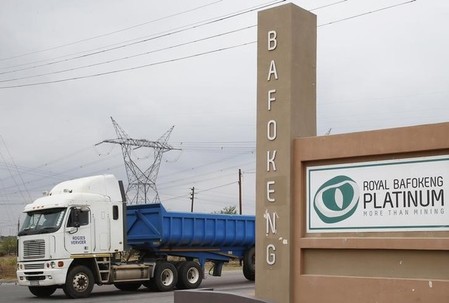 RBPlat, a mid-tier producer of platinum group metals, said it will set the conversion price at between 30 and 35 percent premium to Wednesday’s average trading price, which would also take into account the number shares traded.

RBPlat is a unit of Royal Bafokeng Holdings, which manages commercial assets for the Royal Bafokeng Nation, a community of black South Africans that owns 1,200 square kilometres in one of the world’s biggest platinum deposits.

Shares in RBPlat were 5.2 percent lower at 33 rand by 0700 GMT, reflecting the dilutive impact of the bonds.

If all bonds are exchanged for shares, they would dilute the existing shareholding by about 13.5 percent.

The 2022 bonds are expected to carry a coupon of between 6.5 and 7 percent and is payable twice a year.

RBPlat, rated Baa3 with a stable outlook by Moody’s, said its biggest shareholder, Royal Bafokeng Holdings, agreed to underwrite bonds valued at as much as 621 million rand.

Morgan Stanley and Rand Merchant Bank, a unit of FirstRand, are joint bookrunners and global coordinators.