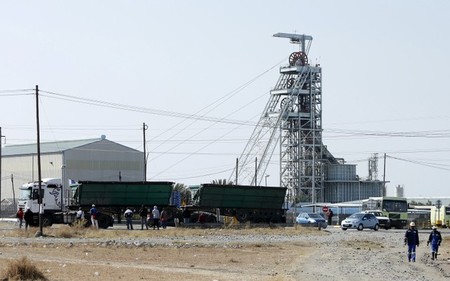 By Zandi Shabalala and Barbara Lewis

LONDON (Reuters) – South Africa’s Sibanye-Stillwater has agreed to buy Lonmin for about 285 million pounds ($382 million) in an all-share deal that drove shares in the troubled London-listed platinum miner up by more than a fifth.

Lonmin, the world’s third biggest platinum producer, has been battling weak global platinum prices and soaring operating costs in South Africa, shrinking the company’s market value by 98 percent in the past five years.

After the announcement, Lonmin’s shares jumped 23 percent, while shares in Sibanye-Stillwater, which will become the world’s second largest platinum producer on completion of the deal, fell 5 percent in Johannesburg.

“This is a bailout deal for Lonmin,” Nedbank precious metals analyst Leon Esterhuizen said “It makes for a good match, but it doesn’t resolve oversupply of the PGM (platinum group metals) industry.”

Global platinum prices are trading around their lowest levels since early 2016, under pressure from bloated supply and declining demand from the automotive industry.

Under the offer, Lonmin shareholders would receive 0.967 new Sibanye-Stillwater shares for each Lonmin share, the firms said.

Following completion of the deal Lonmin shareholders would hold about 11.3 percent of the enlarged group.

“While in some way I am sad, I am sure has hell that this is the right thing for the sustainability of the company,” Lonmin CEO Ben Magara told Reuters.

Under Sibanye’s plans, Lonmin would put all of its older mines on care and maintenance, which means operations stop but they are kept in a condition to resume in future. The plan involves cutting 12,600 jobs in the next three years with a further 890 jobs at risk, a Sibanye presentation showed.

Job cuts are a particularly sensitive in South Africa where unemployment runs at around 27 percent. Lonmin now employs about 35,500 people. All of its mines are in South Africa.

The revised mine plan assumes “lower for longer” platinum prices, the presentation said.

Sibanye and Lonmin have been talking for months, sources said, after looking at Lonmin a few years ago before turning to another deal. One banking source told Reuters the rest of Lonmin’s portfolio would be reviewed over time.

Lonmin, listed in London since 1961, has been undergoing an operational review to help resolve its cash crunch that led its banks to relax some debt covenants. The miner has tapped shareholders for cash three times since 2009.

“Doubtless welcome news to long suffering Lonmin shareholders averting the need to dig into their pockets once again to refinance the company in its regular three to four year refinancing cycle,” said Marc Elliott, analyst at Investec bank.

He said Sibanye management could get the most value from Lonmin’s smelting and refining assets and could also be betting on a rebound in the price of platinum group metals.

Lonmin emerged in the 1990s after the split up of Lonrho, a sprawling conglomerate run for three decades by buccaneering tycoon Tiny Rowland, whose firm was branded in the 1970s by Britain’s prime minister at the time as the “unacceptable face of capitalism”.

Lonmin was in the headlines again in 2012 when 34 striking miners at its Marikana facility were killed by police in the bloodiest confrontation since white rule ended in South Africa.

With Lonmin, Sibanye will leapfrog another troubled miner, Impala Platinum, to become the world’s No. 2 platinum producer.

The government-owned Public Investment Corporation (PIC), which owns 30 percent of Lonmin, increased its stake in Sibanye in November to 10 percent.

PIC was not immediately available to comment on the deal.

In November, Reuters reported on its array of measures to save cash after it delayed its annual financial results pending conclusion of a business review.

UBS and HSBC advised Sibanye on the deal.