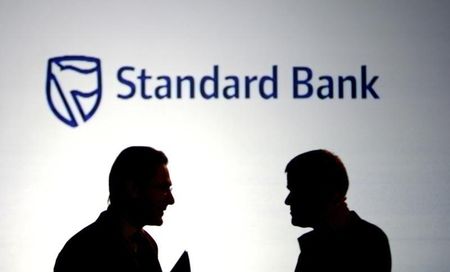 JOHANNESBURG (Reuters) – South Africa’s Standard Bank said on Wednesday its full-year profit would rise by up to 30 percent higher, boosted by lower losses from discontinued operations outside Africa, sending its shares up.

Standard Bank said its diluted normalised headline earnings per share (EPS) will be between 20 percent and 30 percent higher for the 12 months to end-December from the previous year.

Headline earnings per share is the main profit gauge in South Africa and strips out certain one-off items.

Standard Bank last year completed the disposal of its controlling interest in its British unit, since renamed ICBC Standard Bank, to China’s ICBC, which also holds a 20 percent stake in the South African bank.

The previous year included the British unit’s loss of 3.7 billion rand which has narrowed substantially in the twelve months to end-2015, the company said.

Shares in Standard Bank were up 4.7 percent at 113.88 rand by 0748 GMT, compared to a 0.9 percent decline in the Johannesburg Securities Exchange’s Top-40 index.