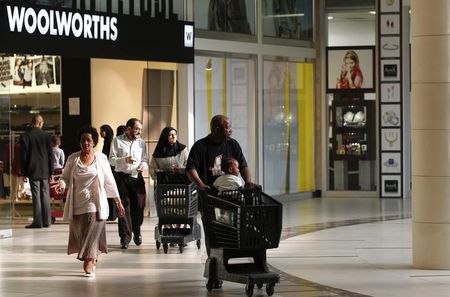 Shares in the retailer slid to a two-month low despite posting a 30.6 percent jump in first-half profit.

Woolworths, which sells upmarket food and clothing, warned rising interest rates in South Africa would further pressure consumers in Africa’s most advanced economy, where it makes nearly 60 percent of its sales.

“It would be more conservative, in what is a volatile environment, to offer scrip rather than cash,” said Woolworths Chief Executive Ian Moir, referring to dividends paid in shares rather than cash.

Shareholders will have a choice between a scrip and a cash dividend, the company said.

If all shareholders chose scrip, Woolworths would have 1.5-1.6 billion rand more for investment and to pay off debt, Moir said.

The company is committing capital to its expansion plans in Australia, said Moir, where it last year bought department store chain David Jones.

South Africa’s retailers are battling to boost sales as consumers check spending, though Woolworths has done better than rivals due to its appeal to high-income customers.

But a severe drought in southern Africa and the weaker rand is expected to stoke food price inflation, and though higher maize prices should not have a direct impact on higher income shoppers, their spending could sag.

“When we see food inflation coming through, our customers, even at the upper end, tend to buy less items,” said Moir.

Earnings per share were affected by costs to acquire David Jones and the dilutive effects of share issues to finance the transaction and a black empowerment deal.

Headline earnings per share, the most widely watched profit measure in South Africa, which strips out certain one-off items, were up 30.6 percent at 253.5 cents for the six months ended Dec. 31.