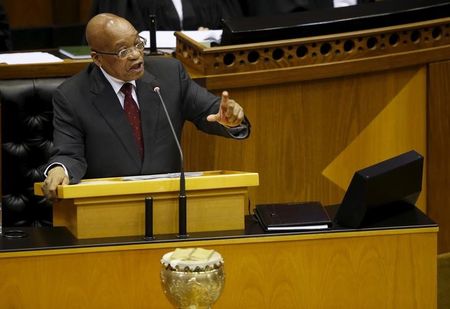 The mining industry, which contributes around 7 percent to Africa’s most developed economy, is struggling with sinking commodity prices, rising costs and labour unrest, forcing a number of companies into mine closures and layoffs.

“We meet under difficult conditions. The global economy is experiencing a downturn which is posing a challenge for South Africa’s economy, which is a net exporter of key mineral commodities,” Zuma said in opening remarks at the Mining Sector National Consultative Forum in the capital Pretoria.

The meeting comes after a 10-point plan was signed by the mines ministry, labour and industry to stem a wave of job cuts triggered by falling prices and rising costs.

Zuma’s ruling ANC party is facing increasing pressure from the left-leaning parties who accuse him of neglecting the working class ahead of local elections next year.

Mines Minister Ngoako Ramatlhodi told reporters he wanted to save mines while also conserving jobs and that the meeting with Zuma would hopefully yield solutions to the job losses.

“It is crucial, it is important and we have elevated it to the president’s level and that tells you the importance we have attached to this gathering,” he said.

Ramatlhodi has previously said almost 12,000 mining jobs were on the line in South Africa, which has an unemployment rate of around 25 percent and glaring income disparities.

South Africa sits on close to 80 percent of the world’s known reserves of platinum, a metal used in emissions-capping catalytic converters which is facing depressed demand.