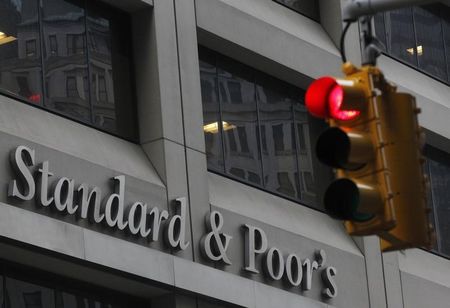 JOHANNESBURG (Reuters) – Standard & Poor’s kept South Africa’s credit rating at BBB- on Friday but changed its outlook to negative from stable, saying this reflected the view that economic growth might be lower than expected.

In a statement, S&P said it expected GDP growth in 2016 to remain around 1.6 percent and only increase above 2 percent from 2017 as the capacity of electricity supply improved.

“The negative outlook reflects our view that GDP growth might be lower than we currently expect, or that fiscal flexibility might reduce owing to contingency risks from state-owned entities with weak balance sheets,” it said.

The Treasury did not immediately comment on the S&P move on Friday, with a spokeswoman saying it would issue a statement once the Fitch review was out.

The rand currency briefly turned weaker against the dollar after the statement, before recouping some of the losses.

“The decision to change the outlook … speaks volumes of the steady deterioration in credit metrics that has enveloped South Africa post-crisis,” Standard Chartered analyst Razia said, referring to the 2008/2009 crisis during which South Africa fell into recession.

“The potential loss of South Africa’s hard-won investment grade rating, should serve as a wake-up call to try even harder to arrest this deterioration.”

S&P had said in March Pretoria’s rating was unlikely to change in the next 24 months, but warned an electricity crunch would shave 0.3 percent off economic growth this year.

Africa’s most industrialised but struggling economy has seen its sovereign ratings by Moody’s and S&P gradually slip to just one notch above non-investment grade.

Fitch, which rates South Africa at BBB with a negative outlook, was also due to issue a review later on Friday.

The National Treasury cut its economic growth forecast for 2015 to 1.5 percent in October from the 2 percent predicted in February, citing domestic energy constraints and the impact of a global slowdown