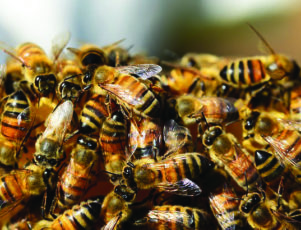 Beekeeping represents a win-win for Zimbabwe: It is a cash crop for thousands of struggling farmers and it encourages preservation of the nation’s depleted forestland.

The Beekeepers Association of Zimbabwe estimates there are more than 50,000 bee farms flourishing in the southern African country and the number is growing. Beekeeping has become profitable thanks to high consumer demand for honey as well as beeswax. Bees also pollinate crops, helping increase food production.

Beekeeping serves another important purpose: giving farmers a reason to preserve their woodlands. In Zimbabwe, forests have been ravaged by tobacco farmers who use wood to cure their crops and by high consumer demand for firewood fueled by the country’s frequent power outages.

Tobacco farmers cut down up to one fifth of Zimbabwe’s 800,000 acres of natural forest each year, according to the government forestry commission.

Zimbabwe’s Department of Agricultural and Extension Services provides training for would-be beekeepers as do a variety of nonprofit organizations, including the European Union’s Forest Forces project and the Ruzivo Trust.

According to the Trust, beekeeping can add stability to farms that are highly dependent on abundant rainfall, which is no longer a given as climate change brings drought to the region. The Trust set up demonstration projects and used a “learning by doing” approach to train 100 families in Goromonzi. Most of the families combine beekeeping with growing crops and raising cattle.

One new beekeeper is Divas Matinyadze, who maintains about four dozen hives in a dense patch of forest near Mpudzi.

Matinyadze, who was trained by the government, was a successful farmer of cotton and maize before he switched to bees in 2014. He said he makes up to $60 per hive during each of two yearly honey harvests, enough to buy food for his family.

Isaac Mamboza, a beekeeper in the Chipinge district, said he was part of a group of 25 farmers who started a local beekeeping project with hives in the trees near a local dam.

“Beekeeping can help us protect our forests,” Mamboza said.

However, the burgeoning beekeeping industry faces threats from drought and from another insect that kills bees.

The current drought in the region has cut honey production.

This year, the drought has left more than 4.5 million Zimbabweans without enough to eat, according to the government. The country estimates it needs at least $1.6 billion to feed the country.

Matinyadze said he delayed his spring harvest because there was so little pollen, adding that his crops have sustained much more damage from the drought than his bee hives have.

Another major emerging threat is the “pirate bee,” an insect that invades the entrances of bee hives and kills the bees. This forces the bees to hibernate inside their hives, meaning they are not outside collecting nectar to produce honey.

The pirate bee or cuckoo bee, along with water shortages, have forced beekeepers to cut back from three to two harvests per year, according to Nyovani Ndlovu, a beekeeper in Lupane.

Several other insects, among them beetles and wasps, also hurt yields during the production of honey by infesting hives and forcing bees out.

Cliff Maunze, who heads a Forest Forces team, said beekeepers are upgrading their hives to use a sticky substance to trap the pirate bees and other predatory insects when they land on the hives. Maunze said the project also plans to plant gum trees to increase the density of forests where the bees forage.

Despite the challenges, experts see beekeeping as an important game changer for agriculture in many parts of the continent.