The central banker Kenyans trust with their cash 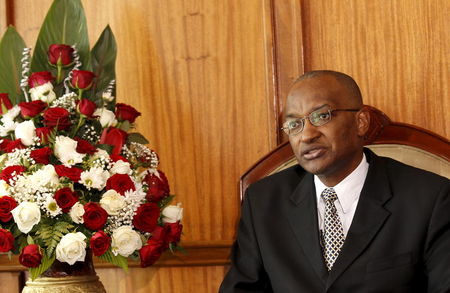 NAIROBI (Reuters) – Kenya’s central bank governor has yet to complete six months in the job but he has done what few of his country’s officials ever achieve: he has made people feel their money is safe in his hands.

This is less because of Patrick Njoroge’s success in stabilising the plummeting shilling and more to do with his shunning the fleet of luxury cars and the plush villa that come with the post, the kind of perks widely seen as motivating most public servants.

In Africa, people are more used to “Big Men”, who are in office for personal gain. Kenyans use the term “eating” to describe how officials and their kin gorge from the trough of public funds, until they have to hand over to the next guy.

In a nation where many live in villages without mains electricity or proper roads, members of parliament are paid about $94,000 annually, dwarfing the average Kenyan’s $1,290 a year.

“The ‘Big Man’ syndrome – in which the only way to show who I am is by flaunting all the possessions that I have – is kind of dangerous,” said Njoroge, 54, a member of Opus Dei, a Catholic group that encourages those who join to live saintly lives in their everyday work.

For much of an interview with Reuters at the central bank on Tuesday, the Yale-educated banker who was appointed in June rattled off explanations of how monetary policy was anchoring inflation, steadying a currency that was “dropping like a stone” and laying the basis for sustained economic growth.

But he politely and carefully fielded questions about what he called his “simple life”, which has fascinated Kenyans more used to a daily diet of stories about corruption in high office.

“At least we can trust him because he is not there for personal gain,” said James Mwangi, 27, a car salesman, chatting over a beer in a Nairobi bar. “I believe our money is safe.”

When parliament grilled the former International Monetary Fund adviser for the job, questioners focused mostly on his celibacy – a commitment a fellow Opus Dei member says he made on joining the group – and other aspects of his lifestyle.

“The perception that he can’t be bought and, yes, turning down the perks was impressive to Kenyans,” said John Githongo, one of Kenya’s most prominent anti-corruption campaigners.

But Githongo said it was too early to judge his policies. “He’s ex-IMF, not an institution associated with success in Africa,” Githongo said, referring to the Washington-based body’s reputation among critics for pushing liberalising policies in Africa that they say hurt the poor the most.

Yet Njoroge has won praise from many in Kenya’s finance community. “The tone he has set has been remarkable,” said Aly Khan Satchu, a private investor and financial analyst.

As well as raising interest rates to curb inflation expectations and helping to stabilise the currency, he ordered the liquidation of a small bank and put another lender, mid-tier Imperial Bank, into receivership when massive fraud was uncovered. He did this less than four months into the job.

“Flexibility, being nimble is essential,” the governor said.

When tight monetary policies appeared to starve smaller banks of funds after the Imperial Bank case, the governor reversed course by providing the money markets with more funding, a move welcomed for its promptness.

“Policy makers here … tend not to adjust quickly enough,” said Satchu, alluding to Njoroge’s predecessor who was blamed in 2011 for failing to raise rates quickly enough as inflation rocketed to almost 20 percent and the shilling plunged.

Heavy rains sent food prices soaring and pushed Kenyan inflation to 7.32 percent in November, but it remains within the government’s preferred band. Njoroge said core inflation was slipping, which suggested the headline rate would fall.

“I wish I could say something about controlling the weather,” said the governor.

He joined thousands on a rainy day last month for Mass celebrated by Pope Francis on his first tour of Africa, which began in Nairobi. Njoroge enjoyed one privilege of office: he was in a tent with dignitaries, not under the open skies.

But he has shunned other benefits. Entitled to a Range Rover, Mercedes and VW Passat as governor, Njoroge turns up at events in the cheapest, the VW. “Why not stick to one car?” the governor said, without mentioning the model.

Instead of moving into the governor’s official residence in Nairobi’s smart Muthaiga district, he lives with other members of Opus Dei and donates a portion of his salary to charity, said Andrew Ritho, who works in Opus Dei’s communications office in Kenya.

“You live the way you want to live,” Njoroge said. “Whether the people see it or not, that is secondary.”