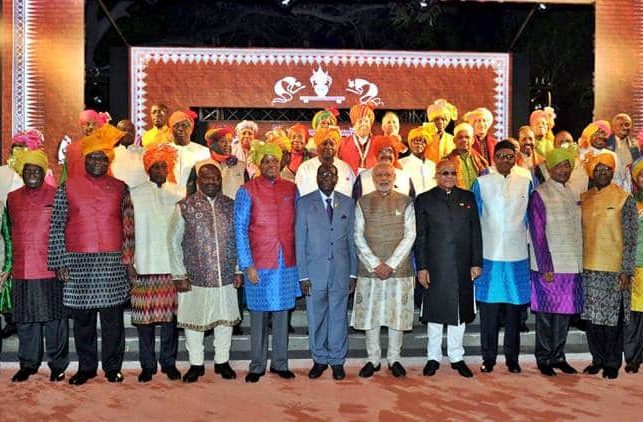 The Third India-African Forum Summit took place in New Delhi on October 26-29, 2015. This Summit was arranged to develop trade between the emerging economies of Africa and India and explore improving relationships in other areas on a bilateral and continental level such as involvement in United Nations .The intent of this summit was shown by a higher representation from Africa (over 50 leaders) compared to the previous summits where only 10-15 African nations were present.

Developing relations in a new era

India is now Africa’s fourth largest trading partner behind China, the United States and the European Union nations. At this summit discussions were held at different levels addressing a number of issues with the intention of improving dealings between the attending nations. For instance, India proposed to increase concessionary credit to $10 billion over 5 years to enable further trading opportunities with African nations. Currently the trade figure between India and Africa stands at $70 billion – a substantial increase from $3bn in 2000 when India started showing significant growth. As more African nations are showing an improvement in economic growth, the discussions in this summit were an opportunity to work on higher goals.

India’s trading with Africa is mainly in importing of oil and other raw energy products to support its own economy’s growth in areas such as manufacturing. This summit saw further discussion between India and its main trading countries such as Nigeria, South Africa and Angola on further trade in light of falling oil prices. Africa allows foreign investment in its oil industry unlike Saudi Arabia and certain Asian countries. It is expected that oil trade between Africa and India would further expand and flourish, as India imports 90% of its oil from Africa and the commodity is increasingly available in conflict-free areas.

Further agreements were reached to offer 50,000 scholarships for students from Africa to study in India over 5 years. India has also agreed to provide training and construction of more educational institutions across Africa as well as expand the Pan Africa E-Network. The continuation of duty free provision to 34 countries will allow further advantages to increase trade between attending nations

Prime Minister Narendra Modi also announced the joint co-operation in challenging the effect of climate change. India and the more developed African nations are known to have high rates of pollution and so any steps to control this situation on a collective basis would be beneficial. Growth on a scale not previously known to developing countries was acknowledged as being encouraged without any serious effect on the environment.

One of the obstacles to further growth of India and African nations, as with other nations, is terrorism. The biggest problems are in Somalia with Al Shabab and in Nigeria with Boko Haram. Somalia is in a particularly fragile situation and can ill afford to drive away investment. Nigeria is India’s biggest trading partner in Africa and so would benefit from efforts to control terrorism. The summit was also told that there would be improved arrangements in the deployment of troops in areas where conflict still exists. This would require the involvement of the African Union and the United Nations.

A summit too high?

Internet searches on interviews with African leaders provided little information on what African nations sought from this summit. The few interviews reported related to information about late arrivals by some leaders and non-attendance by others. There was also a similar lack of information from African academics and think tanks. This raises doubts about the importance they place on the event. Given that South Africa will host a summit of African nations with China in December, it is not clear how much importance is placed on developing trade with India.

India has had a long relationship with Africa because of a colonial past where several African nations are part of the Commonwealth. The Indian diaspora in Africa numbers approximately 3 million people and this provides an added advantage in developing links with India. While China’s trade figures with Africa are substantially higher than India’s at $200 billion, it has been noted that China has a more neo-colonial approach to foreign trade. Ultimately Africa should use investment to increase its own competiveness and capacity and not be dominated. India relies on Africa whilst being a more solid trading partner and this was one clear outcome of the Third India African Forum Summit this year. Africa’s stance in the forthcoming summit with China will be an interesting indicator.