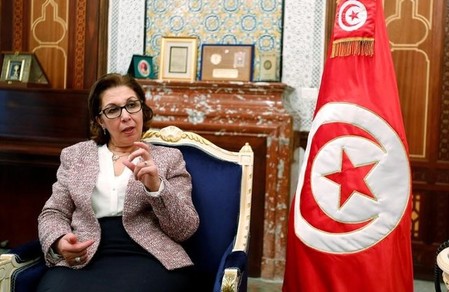 TUNIS (Reuters) – Tunisia’s central bank will reduce its interventions so the value of the dinar steadily declines, but it will prevent a dramatic slide in the currency, the finance minister said on Tuesday.

The strategy is part of Tunisia’s talks on reforms with the International Monetary Fund. The IMF is pushing Tunisia to overhaul its finances and reduce public spending, especially public-sector wages, where spending is among the highest in the world compared with gross domestic product.

Part of those negotiations have been finding ways to encourage exports and reduce reliance on imports, a strategy which would benefit from a weaker dinar.

“The central bank is going to minimise its interventions to reduce the value of the dinar in a gradual slide of the dinar,” Finance Minister Lamia Zribi told local Express FM Radio. “But we will avoid a brutal devaluation like that in Egypt.”

The dinar reached 2.5 dinars to the euro on Monday.

Egypt floated its currency, the pound, last year, letting it fall by 32.3 percent.

The IMF on Monday agreed to release a delayed $320 million tranche of Tunisia’s $2.8 billion in loans. It had been held up by concerns over Tunisia’s lack of progress in its reforms.

The agreement to release the funds came after talks in Tunis that included setting priorities for progress in the reforms. Those include increasing tax revenue, reducing the public wage bill through civil-service reforms and reducing energy subsidies, according to an IMF statement.

The finance minister said the reforms on public works may include early retirement, reforms to loss-making public companies and social funds.

“For our part we are willing to advance the reforms and avoid the painful reforms such as lifting subsidies completely,” she said.

Tunisia has been held up by as an example of a democratic transition since the overthrow of former President Zine El-Abidine Ben Ali in 2011. It has enacted a new constitution, held free elections and adopted compromise-style politics to overcome tensions between secular and Islamist leaders.

But economic reforms have lagged and many people are concerned about the cost of living, unemployment and rural marginalisation, especially in southern and central regions that were the heartland of the 2011 uprising.